While there are many great new features in macOS Monterey, several of them are not available on Intel-based Macs, according to Apple. 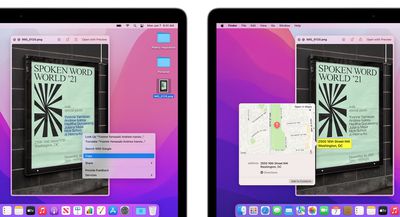 On the macOS Monterey features page, fine print indicates that the following features require a Mac with the M1 chip, including any MacBook Air, 13-inch MacBook Pro, Mac mini, and iMac model released since November 2020:

Apple is currently in the midst of a two-year transition from Intel processors to its custom Apple silicon chips in Macs, with the changeover slated to be completed by WWDC 2022. Macs with the M1 chip have proven to be much faster than their equivalent Intel-based predecessors, with even the base model MacBook Air with the M1 chip outperforming a maxed-out Intel-based 16-inch MacBook Pro in benchmarks.

Apple is widely rumored to be planning redesigned 14-inch and 16-inch MacBook Pro models powered by a faster iteration of the M1 chip for later this year.

macOS Monterey is still compatible with a wide variety of Intel-based Macs, and is available now in beta for developers. The software update will likely be publicly released to all users at some point between September and November.

Update: According to Rene Ritchie, Intel-based Macs lack the Neural Engine that many if not all of these features require.

I'm not sure they have to explain. By nature of the M1 architecture (Neural Engine, etc), the M1 chips have a more optimized architecture than x86, for how Apple writes these particular programs/features.

An interactive 3D globe doesn't require a neural network to display. Google Earth has had a 3D interactive map for almost fifteen years.

They NEVER have to explain anything - it's their choice. However, just because that is the case doesn't mean that people can't be rightfully angry about it.

Apple is selling devices TODAY that aren't capable of the full set of features in their latest OS release. This isn't a "we finished our transition to Apple Silicon - these new features will only be available for Apple Silicon Macs." This is them continuing to sell Macs starting at $1800 USD that will immediately become obsolete as it relates to running the full software stack.

That's not to say that some of this stuff does seem to require Apple Silicon support - like live text, etc. But that doesn't mean consumers can't be angry about this.
Score: 93 Votes (Like | Disagree)

jgbr
This is an outrage. No technical reason this can’t be on Intel.
Forced depreciation in action.
Score: 80 Votes (Like | Disagree)

Maclver
Sighhhh... and it begins.
Score: 74 Votes (Like | Disagree)

fromsixtozero
So if you buy your new 16MBP now, it is basically already partly unsupported. Nice.
Score: 49 Votes (Like | Disagree)

RSB96
It feels like Intel Macs are going to be killed off quickly.
Score: 43 Votes (Like | Disagree)
Read All Comments