With iOS 15, Apple is introducing more granular control over the people and places that show up in your Photos Memories, letting you fine tune just who makes random appearances in the ‌Photos‌ app and the ‌Photos‌ widget. 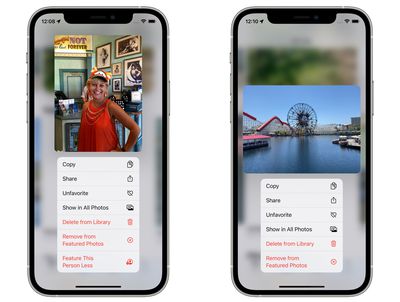 In iOS 14, the option on the right was available, but in ‌iOS 15‌, the person-specific option is new
You've already been able to select "Suggest Fewer Memories Like This" when viewing a memory in the "For You" section of ‌Photos‌ or remove a photo from photo suggestions entirely, but now you can choose to feature a specific person less often.

When viewing the For You section of the ‌Photos‌ app, you can long press on an image with a person and select the "Feature This Person Less," option to prevent that person from popping up as often. The Remove From Featured ‌Photos‌ option prevents a specific photo from reappearing.

These new controls for better managing what shows up as a featured image will come in handy when an unpleasant memory pops up, perhaps one featuring an ex-partner or a place that has a negative association.

Over the years, people have complained about the Memories feature in the ‌Photos‌ app and some of the people that it opts to feature.

I’m not a very petty person but is it possible for your iPhone to *not* feature photos of your exes or do I have to go through my photos and delete them manually like a caveman — Elijah Wood (@KnockOnWood91) October 1, 2020

The prior "Suggest Fewer Memories Like This" option that was available in iOS 14 for memory slideshows has been renamed "Feature Less," and you can select specific people, dates, and places to feature less often in Memories.

In iOS 14, you could select "Suggest Fewer Memories Like This," but in ‌iOS 15‌ you can be more specific, choosing people, dates, and places to feature less.
It's also worth noting that in a memory slideshow that Apple suggests, you can also now tap on the grid button on toolbar to enter into a view that shows you all of the photos at once. Just long press on it to get a "Hide from Memory" option that makes it disappear.

These new features are available in the ‌Photos‌ app in the current ‌iOS 15‌ beta. ‌iOS 15‌ will be in beta testing for several months, with a launch to come in the fall.

Or you could, I don't know, delete the photos?

grantew1
Or you could, I don't know, delete the photos?
Score: 26 Votes (Like | Disagree)

ouimetnick
I’m sure Melinda Gates will find this feature useful especially since she can now allow Apple devices in her household.

I’ve reached out to MacKenzie Scott to let her know as well. ?
Score: 17 Votes (Like | Disagree)

am I the only person who dumps all the photos off my phone every couple months? this is only an issue on Facebook for me

No I’m with you …I delete everything… . No evidence, that relationship ever happened.
Score: 16 Votes (Like | Disagree)

Konigi
I'm really glad for this. I've been using Apple OSs for 10 years. Had about 5 partners in the meantime. I don't want to delete the photos. But don't want them to be featured either.
Score: 15 Votes (Like | Disagree)

BreakingKayfabe
Good to know for the divorce.
Score: 14 Votes (Like | Disagree)
Read All Comments

Friday October 29, 2021 3:16 am PDT by Tim Hardwick
Google Photos users on iPhone and iPad will soon be able to lock their most sensitive images in a special passcode-protected folder, thanks to a new feature coming to the iOS app (via The Verge). Currently exclusive to Pixel phones, the privacy-oriented Locked Folder feature allows users to save photos and videos in the app within a separate space that requires a passcode or fingerprint to...
Read Full Article • 46 comments