Apple is planning to bring the new Spatial Audio with Dolby Atmos feature to Android devices in the near future, according to a brief mention on the Spatial Audio intro page available in the Apple Music app. 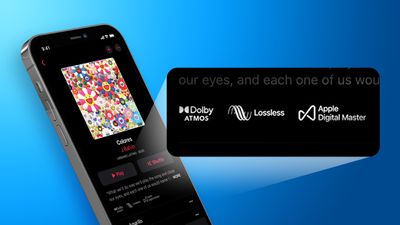 Since debuting ‌Apple Music‌ Spatial Audio, Apple has only mentioned availability on Apple devices and did not previously make it clear that the feature will also be available to Android users. TechCrunch first noticed the mention earlier today following the late night launch of the feature yesterday.

Aye! RIP other music platforms. Apple is not playing around

I don't think this is going to kill any other platform, but it sure is a welcome change.

There's a major problem with all theses new logos so far : the rollout was bad, like really bad. We need to read quite a lot to actually understand who benefits from it and how (do I need special headphones? Apple headphones only? Wired headphones only?).

They need to simplify the message. They had a chance at WWDC and didn't use it.
Score: 6 Votes (Like | Disagree)

Say what you will about Apple, but they have been invested in music distribution for a very long time, and have great relationships with most of the music studios, and even with many artists.

I know Apple has been in the music distribution business since early 2003, and being a larger company they probably have more leverage, but that doesn’t excuse Spotify for sitting on their ass.

Spotify complains about not being able to make a proper AW app. Apple finally let’s them and Spotify does a half assed job.

Spotify users beg and even sign a petition for Spotify to bring offline music support to AW. Spotify ignores their users for YEARS and finally brought it a month ago. Wtf?

Spotify complains that Apple won’t allow them to support HomePod. (poor choice by Apple, probably why the original HomePod was a failure) Apple finally opens up support for 3rd parties on the HomePod, Pandora, Deezer and others bring support, Spotify doesn’t.

Spotify has ONE job, to be a great streaming music platform. They suck. They complain about being at a disadvantage (they were) but when Apple levels the field (probably to look good with government regulators) Spotify goes silent and doesn’t take advantage of the new opportunities.

The real kicker for me was my mom signed up for Spotify premium and it was a bitch to cancel. Close to 5 different confirmation pages where they switch around the ”cancel” and “cancel subscription” buttons to throw off users. Very deceptive and difficult. I’ve canceled Apple’s services before with ease.

Apple needs to fix their AI and music suggestions. The only reason my friends use Spotify is because they like Spotify’s recommendations better. Apple should work at that, they’ve got the money and talent.

My question to Spotify is: If you guys are so smart, why didn’t you come up and implement Spatial Audio before Apple? You mean to tell me you don’t hire any talented engineers?
Score: 3 Votes (Like | Disagree)

anthony13
and let me guess, then we'll have to manually redownload our library's yet again? this roll out has been a wreck from the start.
Score: 2 Votes (Like | Disagree)

and let me guess, then we'll have to manually redownload our library's yet again? this roll out has been a wreck from the start.

well is it really a question ? I mean … how could you not re-download music !? Always complaining for sure …
Score: 2 Votes (Like | Disagree)
Read All Comments