The macOS 12 Monterey and iPadOS 15 updates that Apple introduced today bring a key iPhone feature over to the Mac and iPad -- Low Power Mode. On Apple's Monterey page that breaks down all of the new updates, there's a listing for Low Power Mode. 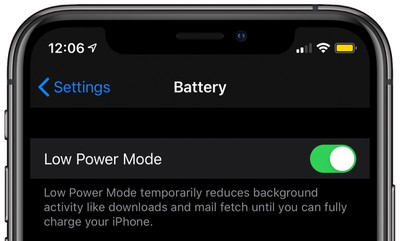 According to Apple, Low Power Mode on Mac reduces the system clock speed and the display brightness in order to extend your battery life even further. This means that if you're doing less intensive tasks like watching videos or browsing the web, you can eke even more out of your Mac's battery.

At least that’s what it says on the webpage.

thejadedmonkey
Didn't OS X used to have a dropdown that would let you choose between better battery life and better performance?
Score: 4 Votes (Like | Disagree)

Before anyone continues to suggest otherwise: Low power mode is also available on iPadOS 15. I’m using it in the new beta — yellow battery icon and all — right now.

They should really have included that on the summary screen but instead they thought "New outfits for Memoji stickers" was a better use of that space.
Score: 3 Votes (Like | Disagree)

itsmeaustend
Completely dropped the ball with this one Apple. The iPad has missed this feature for years, come on!!!
Score: 3 Votes (Like | Disagree)

According to Apple, Low Power Mode on Mac reduces the system clock speed and the display brightness in order to extend your battery life even further. This means that if you're doing less intensive tasks like watching videos or browsing the web, you can eke even more out of your Mac's battery.

It goes to show how much display brightness can impact your battery life.

Even if you're not running Monterey, turning your display brightness down as much as you can while still maintaining screen readability should help you get a lot more life out of your Mac's battery, I've found. The same goes with pretty much any device that uses a display. Even the old iPod Classic had the option to adjust its display brightness—a feature which likely also helped improve battery life to some extent.
Score: 2 Votes (Like | Disagree)
Read All Comments