Apple has published its annual supplier responsibility report, which outlines the progress it and its suppliers are making towards improving the rights of workers, furthering environmental protection goals, the response to the global health crisis, and more. 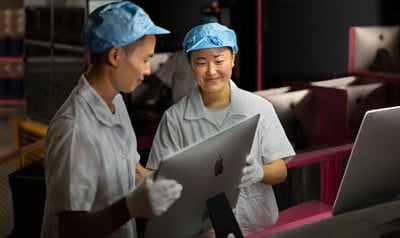 The report contains detailed information ranging from how Apple addresses reports of violations within its supply chain to how the company has assisted its suppliers in handling the challenges throughout the past year. The company's senior vice president of operations, Sabih Khan, opens the report by extending a special thanks to Apple employees, partners, and suppliers worldwide for their resilience throughout the past year.

I want to start with a message of gratitude to our teams and to the global network of Apple suppliers. You set an example of care for one another's health, innovating through every challenge, and helping bring technology to our users at a time when we've never relied on it more.

Regarding labor and human rights, Apple says that since 2008, more than 21.5 million workers have been taught their rights from suppliers and that more than 55,000 supplier employees have been interviewed as part of regular supplier assessments. Apple also says that it has found no evidence of forced labor within its supply chain.

Focusing on environmental goals, Apple says that it's working hard and in close cooperation with suppliers to ensure that they meet the goal of being fully carbon neutral by 2030. Apple provides a few environmental statistics, including the fact that it's saved more than 41 billion gallons of water since 2013 thanks to its Clean Water Program. In addition, in 2020, the company diverted more than 400,000 metric tons of waste from landfills and more than 1.65 million metrics tons of waste from landfills since 2015.

The full report can be found on Apple's website.

Sunday June 20, 2021 4:15 am PDT by Tim Hardwick
A wireless network naming bug has been discovered in iOS that effectively disables an iPhone's ability to connect to Wi-Fi. Security researcher Carl Schou found that after joining a Wi-Fi network with the name "%p%s%s%s%s%n" his iPhone's Wi-Fi functionality was left "permanently disabled." Changing a hotspot's SSID did nothing to correct the problem, with even a reboot failing to make a...
Read Full Article • 128 comments