Apple today updated its Platform Security Guide with in-depth security information about the new Magic Keyboard with Touch ID, the ability to unlock an iPhone with an Apple Watch while wearing a mask, and more. 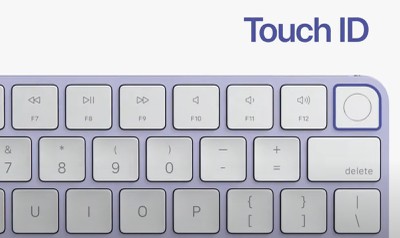 The updated guide reveals a few interesting tidbits about the Magic Keyboard with Touch ID, including that it is compatible with the built-in Touch ID sensor on recent MacBook Pro and MacBook Air models:

This compatibility means that, from a technical standpoint, there is nothing stopping Apple from selling the Magic Keyboard with Touch ID on a standalone basis. As we previously reported, the new Magic Keyboard is fully compatible with all M1 Macs, but Apple is currently only offering the keyboard with the new iMac unveiled last month.

Apple has made some previously iMac-exclusive accessories available to purchase separately at a later date in the past. When the iMac Pro launched in December 2017, for example, Space Gray versions of the Magic Keyboard, Magic Mouse, and Magic Trackpad were only available with the iMac Pro, but became available separately in March 2018.

To enroll a new fingerprint, the user must physically confirm their intent to use a Magic Keyboard with Touch ID with the Mac, according to Apple. Physical intent is confirmed by pressing twice on the Mac power button when indicated by the user interface, or by successfully matching a fingerprint that had previously been enrolled with the Mac.

As for unlocking an iPhone with an Apple Watch on iOS 14.5 and watchOS 7.4 or later, the following criteria must be met, according to Apple:

The updated Platform Security Guide is available on Apple's website, with a document revision history included on page 214.

I don't understand why Apple won't sell them separately. Seems like they'd be in big demand.

performa_6400
This will bridge a sizable UX gap for those of us that work in clamshell mode. Love it.
Score: 5 Votes (Like | Disagree)

jayducharme
I don't understand why Apple won't sell them separately. Seems like they'd be in big demand.
Score: 4 Votes (Like | Disagree)

Neberheim
I would think that Apple is waiting to sell the keyboard separately until they have finished transitioning the consumer-oriented computers away from Intel. You just know that people would buy an Intel Mac and TouchID keyboard and then be pissed that they aren’t compatible.
Score: 3 Votes (Like | Disagree)

They do have a Numpad version available for the iMac so chances are good they'll eventually sell one.

mystery hill
They should have brought back the inverted-T arrow key layout, to match the MacBook Air and MacBook Pro keyboards.

Even the Magic Keyboard case for iPad has the inverted-T direction keys.