Apple's M1 iMacs are set to start delivering to customers next week, and ahead of the official launch day, benchmarks for the machines have been showing up on Geekbench, likely from reviewers who are testing them. 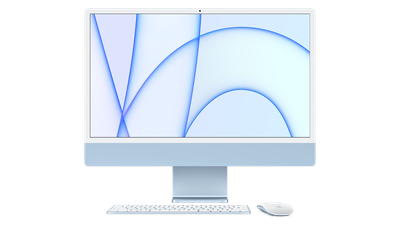 It will come as no surprise that ‌M1‌ iMac benchmarks are right on par with benchmarks for the ‌M1‌ MacBook Pro, MacBook Air, and Mac mini, coming in with an average single-core score of 1724 and an average multi-core score of 7453, aggregated from three benchmarks that are currently available.

Benchmarks are for the iMac21,1, which is likely the entry-level option with an 8-core CPU, a 7-core GPU, and two Thunderbolt ports. The ‌M1‌ ‌iMac‌ benchmarks list 8 CPU cores and a base frequency of 3.2GHz, and they're running macOS 11.3.

‌M1‌ ‌iMac‌
The 24-inch ‌M1‌ ‌iMac‌ significantly outperforms the 2019 21.5-inch ‌iMac‌ with an Intel chip that it's replacing, and it's going to be a solid upgrade over all older 21.5-inch machines.

With these scores, the ‌M1‌ ‌iMac‌ is not going to be able to replace the high-end 27-inch ‌iMac‌ because it lags behind in multi-core performance, but Apple is working on higher-end Apple silicon chips for desktop machines and we'll likely see an even more powerful Apple-designed chip introduced when Apple is ready to replace the 27-inch ‌iMac‌ with a new model.

The ‌M1‌ ‌iMac‌ does outperform lower-end 27-inch ‌iMac‌ models with Intel chips, beating the 6-core Intel models in both single and multi-core performance.

Pricing on the ‌M1‌ iMacs starts at $1,299 for the entry-level model and $1,499 for the version with an 8-core GPU, two additional USB-C ports, Gigabit Ethernet, and additional color options. ‌M1‌ ‌iMac‌ models ordered today will ship out in June, but those who preordered will soon be receiving their machines, and we'll learn more about them when reviews go live.

LiE_
I mean let’s have some perspective here. This is an Intel 8th gen, the 8700. Desktop chips are on 10th/11th gen now which would be a better comparison.


This isn’t to say the M1 isn’t competitive because it is, especially when you consider M1 is entry level and sips power. But comparisons like the article aren’t great when the previous model wasn’t refreshed for ages.
Score: 69 Votes (Like | Disagree)

means all my attention is just staring at that big aluminum panel.

Why are you looking at the chin, and say, not the screen?
Score: 44 Votes (Like | Disagree)

Think|Different
That's just unreal. These are perfect for almost anyone that wants a Mac and doesn't consider themself a Pro.
Score: 41 Votes (Like | Disagree)

Intel should be ashamed of itself.

Let’s not bash Intel. They did a good job powering the Mac for many years. Quantum leaps like this happen every so often in computing. ARM have done a fantastic job.
Score: 34 Votes (Like | Disagree)

I never minded the the chin before, and I don't now, but the missing apple logo means all my attention is just staring at that big aluminum panel. Without it supporting some other visual element, such as speaker perforations or a logo, it becomes its own visual element, & it's not apparent why the design team thought it should be. Strange.

Apple realized that the sticker they send with every mac is finally going to be used.
Score: 21 Votes (Like | Disagree)

I mean let’s have some perspective here. This is an Intel 8th gen, the 8700. Desktop chips are on 10th/11th gen now which would be a better comparison.


This isn’t to say the M1 isn’t competitive because it is, especially when you consider M1 is entry level and sips power. But comparisons like the article aren’t great when the previous model wasn’t refreshed for ages.

Nice to see a voice of reason in here.
Excellent post and a much more relevant comparison.

The M1 and ASi is great, but people need to get off Apple's jock a little.
It's nauseating.
Score: 19 Votes (Like | Disagree)
Read All Comments

Monday June 21, 2021 7:17 am PDT by Hartley Charlton
Users appear to be underwhelmed by Apple's upcoming iOS 15 and iPadOS 15 updates, according to the findings of a new survey by SellCell. The survey asked 3,000 iPhone and iPad users, evenly split between men and women, aged 18 or over in the United States, what they thought of iOS 15, iPadOS 15, and the naming of the upcoming iPhone 13 lineup. Over 50 percent of all of the survey's...
Read Full Article • 353 comments