Last month, Apple opened up its Find My app to third-party device manufacturers, allowing for third-party products to be tracked in the Find My app right alongside Apple devices. 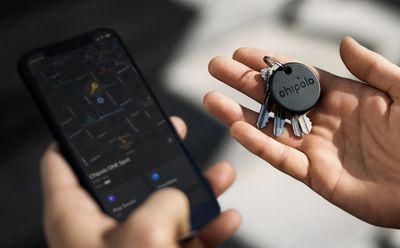 As with the AirTag, users can attach a Chipolo ONE Spot to their keys, wallet, backpack, or other items and track the location of those items in the Items tab of the Find My app. Like the AirTag, the Chipolo ONE Spot has a built-in speaker that can play a sound when misplaced, and it has a replaceable CR2032 battery for up to a year of battery life.

Both the AirTag and Chipolo ONE Spot can leverage the Find My network, meaning that if one of nearly a billion customers with an iPhone or other Apple device comes within close proximity of a lost AirTag or Chipolo ONE Spot, the location of the tracker can be relayed back to its owner, all in the background, anonymously and privately.

One advantage of the Chipolo ONE Spot is that it has a built-in hole for attaching it to a keychain. When you factor in the price of both an AirTag and an AirTag accessory to attach it to items, the Chipolo tracker has greater value.

Chipolo ONE Spot pre-orders will begin shipping in June.

Caliber26
Interesting that they're going for that $28 price. I feel most people -- even the average consumer who doesn't even realize what the U1 chip does -- will say no thank you and opt for the "official" tracker from Apple that costs a dollar more.
Score: 20 Votes (Like | Disagree)

djcerla
While some cry like babies, others do good business using Apple’s infrastructure. Way to go.
Score: 16 Votes (Like | Disagree)

So you can put it on your keys... is this a joke that I am missing?

Why's it got a weird little hole in it?

So you can put it on your keys... is this a joke that I am missing?
Score: 8 Votes (Like | Disagree)
Read All Comments