Apple today released an update on the progress of the Apple Developer Academy program, ahead of applications for the new Detroit site opening this week. 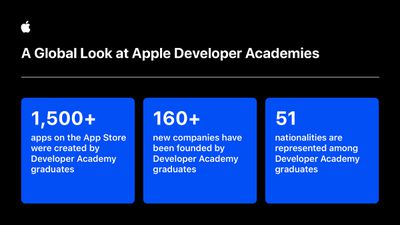 The Apple Developer Academy sets out to provide enrolled students with app development training and entrepreneurial skills. Apple offers two different training programs: 30-day foundation courses that cover specific topics, such as an introductory course on app development as a potential career path, and a more intensive 10- to 12-month academy program that takes a deeper look at coding and professional skills.

The first Apple Developer Academy opened in Brazil in 2013, but since then, the company has opened more than a dozen academies across the globe, including sites in Indonesia and Italy, with two new academies on the way in Korea and Michigan. These expansion plans will give thousands more students access to educational opportunities each year.

Our Apple Developer Academies have helped empower thousands of creators, coders and entrepreneurs around the world with skills for the jobs of tomorrow. Excited to see how future students will pursue their dreams! https://t.co/m1XZhnh8kY — Tim Cook (@tim_cook) May 12, 2021

Applications for the first academy cohort in Detroit, Apple's first Developer Academy in the U.S., open this week via a form on the Michigan State University website. All Michigan residents aged 18 and over are able to apply, regardless of prior coding experience.

Next month, Apple's annual Worldwide Developers Conference (WWDC) will take in an all-online format, featuring hundreds of sessions for developers to learn about new technologies, tools, and frameworks.

Saturday April 3, 2021 6:00 am PDT by MacRumors Staff
While we're still waiting on word of a potential Apple event in April, we did get confirmation about another upcoming Apple event this week, WWDC 2021, which will return to its usual early June timeframe but remain in an all-virtual format similar to last year's edition. Other Apple news and rumors this week included a report about future iPhone SE models, a crazy Apple patent filing that...
Read Full Article • 24 comments

Wednesday February 10, 2021 7:21 am PST by Sami Fathi
Ohio State University today announced that it is opening its Swift Coding and App Development program to the public, giving anyone the chance to learn and code for the App Store. In a press release (via CNET), the university says that more than 3,000 students, faculty, and alumni have joined the program since it launched slightly more than one year ago, and that now anyone can join the...
Read Full Article • 15 comments

Tuesday June 1, 2021 5:13 am PDT by Sami Fathi
Apple today highlighted some winners of this year's Swift Student Challenge, which gives young developers a chance to win special attire and apparel for the annual developer conference. This year, more than 350 winners from more than 35 countries around the world have been selected. Apple highlights a few developers who have won this year's challenge, including Abinaya Dinesh, who created...
Read Full Article • 1 comments

Monday May 17, 2021 12:24 pm PDT by Juli Clover
Apple is working to build a dedicated Developer Center on its Apple Park campus, Apple Fellow Phil Schiller said today during his testimony in the ongoing Epic v. Apple trial. Schiller did not provide additional detail on the Developer Center, and it has not previously been announced by Apple, so little information is available at this time. In the past, Apple had Developer Compatibility...
Read Full Article • 15 comments

Monday January 24, 2022 9:20 am PST by Juli Clover
AT&T today announced the launch of upgraded AT&T Fiber plans, which support speeds of up to 5 Gigabits for some customers. There are two separate plans, one "2 GIG" plan and one "5 GIG" plan, available to new and existing AT&T Fiber subscribers. According to AT&T, the new plans are available to nearly 5.2 million customers across 70 metro areas including Los Angeles, Atlanta, Chicago, San...
Read Full Article • 250 comments