Nearly two years following the release of iOS and iPadOS 13, which included native, built-in, and systemwide dark mode, Snapchat, one of the world's most prominent social media networks, has finally rolled out a dark mode theme for iOS users. 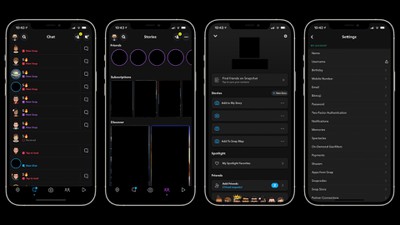 Snapchat began testing a dark mode theme of its app design late last year with a small group of iOS users. Now, Snapchat says that as of this week, it has flipped the switch on access to dark mode for more than 90% of its iOS user base, offering millions of users access to the less eye-straining app interface.

Snapchat users can enable dark mode like so: Tap the Settings icon in the top-right hand corner, navigate the list, tap "App Appearance," then enable either "Always Dark," "Always Light," or "Match System."

Dark mode on Android will start rolling out in the coming months.

Dark mode definitely gives me so much more battery life

Agreed, it is so much easier on the eyes!

Only another decade or so and the Atlassian devs might implement it in Jira... ?
Score: 7 Votes (Like | Disagree)

The most useless social network. But a popular one among young people.
Score: 6 Votes (Like | Disagree)

Robert.Walter
Didn’t even realize Snapchat was still around. Deleted it years ago.

Based on preceding comment they have a surprisingly large active customer base.

(Welcoming them and their users to the Dark Mode side! Haha.)
Score: 5 Votes (Like | Disagree)

martyjmclean
This is cool. For the two people who still use Snapchat...
Score: 5 Votes (Like | Disagree)

InGen
About 6 years too late with that one. That app had to go the second they introduced that propaganda screen full of pop-culture trash and degenerate clickbait clips intertwined with my friends stories. That was the moment they doubled down on their target demographic being teenagers and those with double digit intelligence quotients.
Score: 4 Votes (Like | Disagree)

"I don't use it, so nobody else must be using it too."

Sunday May 9, 2021 2:00 am PDT by Sami Fathi
Zoom, a hallmark platform used by millions during the global health crisis, has been given access to a special iPadOS API that allows the app to use the iPad camera while the app is in use in Split View multitasking mode. This case of special treatment was first brought to attention by app developer Jeremy Provost, who, in a blog post, explains that Zoom uses a special API that allows the...
Read Full Article • 344 comments

Monday May 10, 2021 10:41 am PDT by Juli Clover
Apple's upcoming iPhone 13 models will be slightly thicker than the iPhone 12 models and will also feature larger, thicker camera bumps with lenses that protrude less, according to iPhone 13 schematics seen by MacRumors. The new iPhone 13 and 13 Pro models are expected to feature a thickness of 7.57mm, up from 7.4mm in the iPhone 12 models. That's an increase of 0.17mm, which won't be hugely ...
Read Full Article • 169 comments