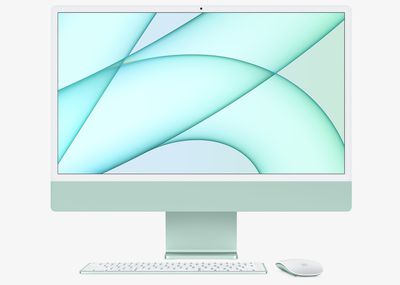 The prediction is based on evidence suggesting that more affordable all-in-one PC brands are being impacted much harder by the global chip shortage as suppliers prioritize their shipments to support more premium products in the AIO market.

The sources pointed out that high-end AIO PCs such as the iMac are only seeing limited impact from component shortages, but entry-level to mid-range products priced between NT$15,000 (US$536.51) and NT$30,000 have been hit much harder. Several ODMs have already halted their production for many AIO PCs because of component shortage, but iMac production remains unaffected, the sources said.

According to Digitimes Research, HP was the largest AIO PC brand in the fourth quarter of 2020, shipping 925,000 units, followed by Apple with 860,000 units, and Lenovo with 731,000 units. However, Apple's shipments are estimated to have surpassed HP in the first quarter of 2021.

That said, overall Apple says it expects to be impacted by the chip shortages, and predicts a sequential decline of approximately $3 to $4 billion revenue in the third-quarter of 2021 due to ‌‌iPad‌‌ and Mac supply constraints. Apple says a combination of the shortages and a very high level of demand for both ‌‌‌iPad‌‌‌ and Mac is expected to impact revenue in the second half of 2021.

djcerla
I know I’m in the minority (or in a silent majority) but I find these new iMacs stunningly beautiful, white bezels and chin included. The iMac has a chin, get over it.

George Dawes
The looks are growing on me , it’s rather cute and in a kids bedroom would be perfect , maybe a kitchen too
Score: 15 Votes (Like | Disagree)

NotTooLate
I was shocked to go to the HP website and find out the the "elite" version which has a 1080p display with 250 nits and a a slow i5 10th gen (same 8GB Ram + 256GB SSD) is starting at 1300$ , for some reason I expected them to be much more competitive in price OR performance , now we will see if a new 24 iMac can bring those customers over , or windows are what makes them sticky , as until now the HP machine was a better value then Apple with their 21.5 slow ass Intel CPU offerings for the same price.
Score: 13 Votes (Like | Disagree)

Was prepared to splashbout and replace the 2011 iMac when these were released. But simply could not being myself to buy something so.... ugly.

Ended up with a Dell for half the price and can upgrade it myself.

So you wanted an Apple computer to replace an Apple computer so instead you bought a PC simply based on looks? Sorry but there are way more reasons to use a Mac over PC than simply looks.
Score: 12 Votes (Like | Disagree)

I agree. We need to make the article needllessly longer.

I would prefer accuracy over the inclusion of 3 or 4 more words.
Score: 12 Votes (Like | Disagree)
Read All Comments