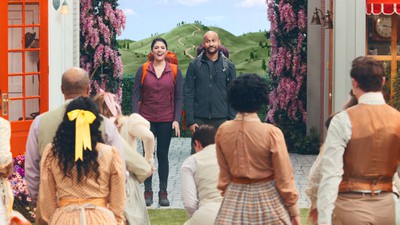 "Schmigadoon" parodies iconic musicals, with the two main stars taking on the role of a couple on a backpacking trip that come across the magical town of Schmigadoon, where everyone lives in a 1940s musical.

A parody of iconic musicals, "Schmigadoon!" is a new musical comedy series executive produced by Lorne Michaels and starring Emmy Award nominee Cecily Strong and Emmy Award winner Keegan-Michael Key as a couple on a backpacking trip designed to reinvigorate their relationship when they discover a magical town in which everyone is living in a studio musical from the 1940s. They then discover that they can't leave until they find "true love."

There are six episodes total in the first season of "Schmigadoon," and the first two will come out on July 16. Subsequent episodes will be released on a weekly basis.

In other ‌Apple TV+‌ news, Apple has inked a deal for "Come From Away, a filmed version of the popular broadway musical. The production is set in the week following the September 11 attacks and tells the story of what happened when 38 planes were told to land in the small town of Gander in Newfoundland, Canada.

I’m just sad to see so many tv series on Apple TV+ are only released with 6 episodes. I get that it costs a lot of money to get these actors and the production quality is usually top notch with ATV+ from what I’ve seen, but 6 episodes just leaves so much to be desired!

If the story-teller has only 6-episodes worth of story to tell right now, it‘s better not to release an extra 6 or 12 episodes full of filler and garbage.
Score: 9 Votes (Like | Disagree)

Born2Run
They had me at 'Cecily Strong'
Score: 6 Votes (Like | Disagree)

WiseAJ
After Mythic Quest and Ted Lasso I have high hopes for this.
Score: 6 Votes (Like | Disagree)

alfonsog
Sounds fun, I love musicals and usually travel to NYC and see them all... so now I just work everyday. I actually played viola for 3 shows this year (Evita, She Loves Me, Songs for a New World)
Score: 6 Votes (Like | Disagree)

True, and I get that, but there seems to be ONLY that type of short-series releasing on ATV+ sadly. Plus, the vast majority haven’t gotten renewed for second or third seasons so we’re stuck with the story-teller’s mere 6 episodes.

Honestly, I think the world needs more mini-series told well than shows that outstay their welcome. "Designated Survivor" would have been a great six-episode drama and instead it limped along well beyond its original premise to become Just Another Political Drama.
Score: 5 Votes (Like | Disagree)