Apple today seeded the second beta of an upcoming watchOS 7.5 update to developers for testing purposes, with the new beta coming one week after the release of the first beta. 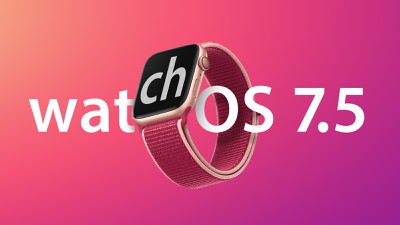 To install the ‌watchOS 7.5 beta, developers need to download the proper configuration profile from the Apple Developer Center. Once the profile is in place, the watchOS 7.5 beta can be downloaded through the dedicated ‌Apple Watch‌ app on the iPhone by going to General > Software Update.

We don't yet know what's included in watchOS 7.5, but it could include bug fixes for issues that aren't included in the watchOS 7.4 update. There were no new features discovered in the first beta, but we'll update this article should we find anything new in the second beta.

Tuesday May 11, 2021 11:56 am PDT by Joe Rossignol
Last month, Apple introduced a new iPad Pro with the same M1 chip found in the latest Macs, and early benchmark results indicate that the M1 iPad Pro is over 50% faster than the previous-generation iPad Pro. Based on five legitimate Geekbench 5 results (here's the fifth) for the fifth-generation 12.9-inch iPad Pro with the M1 chip, the device has average single-core and multi-core scores of...
Read Full Article • 317 comments