Prior to when Apple announced the AirTags, companies including Chipolo, VanMoof, and Belkin debuted products that are part of the Find My network accessory program, integrating directly with the ‌Find My‌ app so they can be tracked when lost. 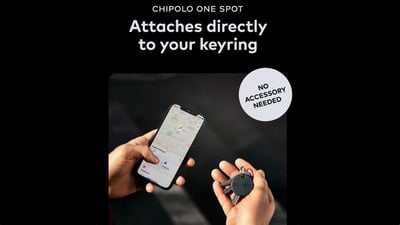 Of the three companies, Chipolo has the most AirTag-like device, a Bluetooth item tracker called the ONE Spot. Chipolo will need to compete with the ‌AirTags‌ to get people to make a purchase, and the company has already started its advertising campaign.

In an email titled "Can you spot the difference?" that was sent to prospective customers, Chipolo said that the ONE Spot "Attaches directly to your keyring," with "no accessory needed," pointing out one of the benefits of its tracker compared to the ‌AirTags‌.

‌AirTags‌ are small, circular item trackers that have no attachment point and require a secondary accessory to attach to key rings and other items. Apple sells accessories starting at $29, which is the same price as the AirTag, essentially doubling the price. Some of Apple's accessories are even more expensive, topping out with a $449 Hermès Luggage Tag.

There are more affordable accessories and some situations, such as tucking the AirTag inside a bag, won't require an accessory, but Chipolo does have an edge with the built-in loop for those who want to use a ring to attach it to keys and other items.

Chipolo's ONE Spot won't be available for preorder for another two weeks and it's not shipping out until June, which puts it well behind the ‌AirTags‌. ‌AirTags‌ will begin arriving to customers later this week.

Because it integrates with the ‌Find My‌ app, the ONE Spot works just like the AirTag and can be located alongside other Apple devices right in the ‌Find My‌ app. It does, however, lack a U1 chip for the Precision Finding feature that the ‌AirTags‌ offer. Chipolo has yet to announce pricing for the ONE Spot.

dwaltwhit
That is a fair critique of airtags. Apple is so confident that they are making money off of selling you a hole.
Score: 37 Votes (Like | Disagree)

kstotlani
This was my first thought. Airtags cost $60 not $30 because of the accessories.
Score: 25 Votes (Like | Disagree)

justperry
Apple touts themselves as being so environment friendly, hypocrites.

Yaboze
Would it have killed them to put a simple loop on it? It cost $29 just to connect it to something? That's ridiculous.
Score: 19 Votes (Like | Disagree)

This was my first thought. Airtags cost $60 not $30 because of the accessories.

kenni417
they're not wrong though. you can be a massive apple fanboy and you still couldn't defend this in a right mindset.
Score: 9 Votes (Like | Disagree)
Read All Comments

Sunday May 9, 2021 2:00 am PDT by Sami Fathi
Zoom, a hallmark platform used by millions during the global health crisis, has been given access to a special iPadOS API that allows the app to use the iPad camera while the app is in use in Split View multitasking mode. This case of special treatment was first brought to attention by app developer Jeremy Provost, who, in a blog post, explains that Zoom uses a special API that allows the...
Read Full Article • 260 comments