As was rumored last week, Spotify today announced a new paid subscription platform for podcasts. The service will begin rolling out in the United States today and then expand internationally in the coming months (via Variety).

The announcement comes exactly one week after Apple announced its own Apple Podcasts subscription platform at the "Spring Loaded" event. 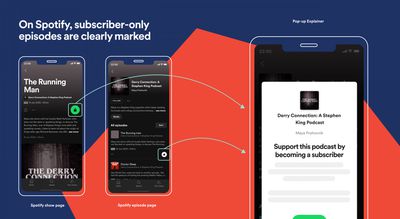 The new Spotify feature will be available to creators through its partner Anchor, allowing podcasters to mark episodes as "subscriber only." Spotify says that it will come at no cost to the creator, and they'll receive 100 percent of subscriber revenue (excluding payment transaction fees). Beginning in 2023, Spotify plans to introduce a 5 percent fee to access the tool.

Podcasters can select from three different price tiers for their subscriptions: $2.99/month, $4.99/month, or $7.99/month. The rollout will begin with 12 independent podcasters on Spotify, and will expand to more creators in a few months.

All of the new subscriber-only content will be fully searchable within Spotify like other podcasts. They'll be marked with a lock icon on the play button, until listeners pay to subscribe to the podcast.

According to Spotify podcast service lead Michael Mignano, the company is trying to show creators that Spotify has "the best terms" for publishing their podcasts.

“We really wanted to come out and show creators that we are offering the best terms… and two years [of no fees] is a great way to do that,” said Michael Mignano, Spotify’s head of podcaster services and tools. He added, “There’s no exclusivity. We’re not locking you into terms.”

To start, Spotify has partnered with NPR to be among the first media companies to launch podcast subscriptions. There will be new ad-free paid shows on May 4, including "How I Built This with Guy Raz," "Short Wave," "It’s Been a Minute with Sam Sanders," "Code Switch," and "Planet Money."

error
I hope subscription fatigue will cause both Apple and Spotify subscription models to fail.
Score: 20 Votes (Like | Disagree)

Only a fool thinks Spotify copied Apple on this.
Score: 16 Votes (Like | Disagree)

eekcat
Sometimes I wonder if Apple introduces mediocre or terrible ideas just to watch competitors without cash-parachutes jump off the cliff with them?
Score: 7 Votes (Like | Disagree)

Only a fool thinks Spotify copied Apple on this.

It was hinted at back in 2019 when Spotify bought Anchor ('https://www.theguardian.com/technology/2019/feb/06/spotify-buys-podcast-firms-gimlet-and-anchor-streaming-profits-music') and Gimlet Media ('https://www.wsj.com/articles/spotify-is-acquiring-podcasting-company-anchor-signaling-broad-ambitions-11549450887') and again in November 2020 ('https://www.theverge.com/2020/11/6/21552822/spotify-podcast-subscription-service-survey')

Rumors of Apple's podcast subscription service didn't pop up until earlier this year.
Score: 6 Votes (Like | Disagree)
Read All Comments