Apple's newly announced M1 iPad Pro models boast a new video calling feature called Center Stage, which uses machine learning to automatically pan and zoom the front-facing camera to keep you center in the frame as you move around. 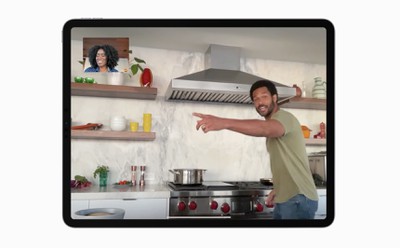 Apple envisages Center Stage being used for video calls that involve things like whiteboarding with coworkers or attending a virtual family gathering. Presumably the feature will also correct the problem of a user not appearing centered in the shot when the iPad is in landscape orientation.

During its announcement, Apple didn't explain whether it would be exclusive to FaceTime calls, but according to iOS developer Federico Viticci, third-party apps will be able to use Center Stage via an API framework, which could mean we'll one day see the feature enabled on Teams and Zoom calls.

Center Stage, the new iPad Pro feature that uses the front-facing camera to automatically follow the user during video calls, is *not* exclusive to FaceTime. Third-party apps can use Center Stage and there'll be an API available to toggle it on/off. #AppleEvent — Federico Viticci (@viticci) April 20, 2021

Center Stage is made possible on the 11-inch and 12.9-inch iPad Pro thanks to the new chipset and an improved TrueDepth camera system, which includes a a 12MP Ultra Wide front-facing camera with a 120° field of view, compared to the standard 7MP wide-angle front-facing camera on the previous generation models.

hellosil
Can we have this on the new iMac too please.
Score: 7 Votes (Like | Disagree)

odHbo
The iPad becoming the Portal of my dreams was very unexpected today. I’m so buying it
Score: 6 Votes (Like | Disagree)

The London Fella
This definitely should have been in the new iMac.

I suppose they're doing it so there's another reason to buy the new iPad.
Score: 1 Votes (Like | Disagree)

ersatzplanet
They show it working with the iPad in landscape mode. How would a "wide angle" lens help this work when the lens is turned 90 degrees in landscape mode? I assume it needs the FaceID sensors to work and that is why it is not on the iMacs but why not put FaceID on them too?
Score: 1 Votes (Like | Disagree)

_Spinn_
This is great for video conferencing so it’s great that third party apps can take advantage of it as well.
Score: 1 Votes (Like | Disagree)
Read All Comments