Following the introduction of the new 11 and 12.9-inch iPad Pro models, Logitech has announced the launch of the Combo Touch Keyboard for the two tablets, offering a more affordable alternative to the Magic Keyboard that Apple sells. 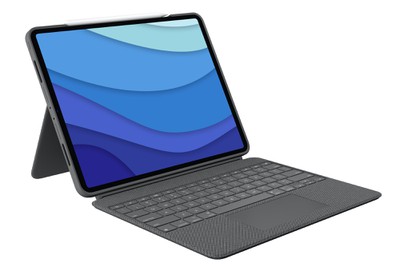 Priced at $199 for the 11-inch ‌iPad Pro‌ and $229 for the 12.9-inch ‌iPad Pro‌, the Logitech Combo Touch Keyboard provides a full folio case with attached keyboard and touchpad that can be used with the new iPad models.

The keyboard is detachable and an integrated stand allows it to be used in various typing, viewing, sketching, and reading modes. It connects to an ‌iPad Pro‌ using the Smart Connector, so there's no need for pairing or charging a battery.

Logitech's Combo Touch only comes in gray. The 11-inch version can be purchased from the Logitech website, and a version for the 12.9-inch ‌iPad Pro‌ is coming soon.

polaris20
I've got the Combo Touch for my regular 8th Gen iPad, and I REALLY love it. That plus my M1 Mini makes me not miss having a traditional laptop anymore. Definitely recommended.
Score: 3 Votes (Like | Disagree)

Exactly. Nor when lying in bed. They are also so unwieldy to unfold, prop and most of all take up so much desk space.

I will give them marks for a good keyboard feel with media keys.

Agree with this - if the Apple version had the top row of extra keys like the Logitech it would be perfect.
Score: 2 Votes (Like | Disagree)

macsareveryinteresting
Logitech may have good keyboards that attach to iPads but Apples are better.
Score: 2 Votes (Like | Disagree)

deevey
Kickstands are just a stupid idea IMHO ... you can't use the damn things on the couch.
Score: 2 Votes (Like | Disagree)

Can you connect the keyboard via bluetooth so you can use it when it's detached?

No, it's just when it's attached.

Logitech may have good keyboards that attach to iPads but Apples are better.

True, but they're FAR more expensive.
Score: 1 Votes (Like | Disagree)

Wildkraut
Probably weights like 3 MacBooks with this thing.
A 2400+299 brick.
Score: 1 Votes (Like | Disagree)
Read All Comments