It feels like we've been waiting forever for new Apple products, but the wait is almost over as Apple has announced a media event for next Tuesday, so make sure to tune into MacRumors for full coverage of everything Apple announces. 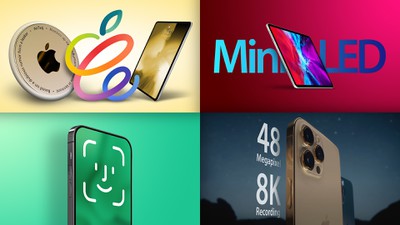 While that was the big news this week, we also got some new details on Apple's iPhone plans for 2022 and 2023 courtesy of analyst Ming-Chi Kuo, and we also saw some leaked iPhone cases in new colors that could make an appearance at next week's event. Read on for details on these stories and more!

Following endless rumors about if and when there would be an Apple Event this spring, a date has finally been set. Just hours after Siri leaked the news, Apple announced that it will be hosting a virtual event on Tuesday, April 20 at 10 a.m. Pacific Time, with a stream available on its website and YouTube.

As with Apple's virtual events in 2020, this event will consist of a pre-recorded video with Apple executives speaking from locations around the company's Apple Park headquarters in California. Apple is widely expected to introduce new iPads at the event, including a new iPad Pro with a Mini-LED display, and there could be other surprises in store such as Apple's long-awaited AirTags item trackers or a redesigned iMac with Apple silicon.

iOS 14.5 will likely be released next week as well following over two months of beta testing. The software update is packed with new features, including the ability for iPhone users who are wearing an Apple Watch to unlock the iPhone with Face ID while wearing a mask. Check out our complete overview of everything we expect to or might see at next week's event.

MacRumors will have in-depth coverage of Apple's event across our platforms, including a live blog on our website and live tweets via @MacRumorsLive on Twitter, so be sure to follow along next week!

One of the new products Apple is expected to announce at its April 20 event is an iPad Pro with a Mini-LED display, and DigiTimes this week reported that Apple supplier Ennostar will be ramping up production of Mini-LED chips for the tablet later this month.

Mini-LED backlighting will reportedly be exclusive to the new 12.9-inch iPad Pro, with benefits including increased display brightness, improved contrast, and more compared to LCDs used in the current iPad Pro models. A new 11-inch iPad Pro is still expected, with both sizes of the tablet rumored to gain a faster A14X chip, Thunderbolt support, improved camera systems, and 5G support for cellular models.

Due to manufacturing issues, the new 12.9-inch iPad Pro could ship later than the 11-inch model and be available in constrained quantities initially.

While we're still several months away from Apple unveiling the so-called iPhone 13 lineup, the rumor mill is already looking ahead to next year.

Notably absent from the 2022 iPhone lineup is a 5.4-inch "mini" model, which appears like it will meet the end of the line next year. That wouldn't be too surprising, as multiple reports have indicated that iPhone 12 mini sales have been lackluster relative to other iPhone 12 models since the devices launched in October. Rumors suggest there will still be an iPhone 13 mini, however, so it appears the 5.4-inch model will live on for one more year.

Looking even farther ahead, Apple analyst Ming-Chi Kuo offered some predictions for 2023 iPhones this week, including the introduction of under-display Face ID that would allow for a full-screen design without a notch or any holes in the display.

The notch has remained unchanged since its introduction on the iPhone X in 2017, but rumors suggest that we will finally see a smaller notch on iPhone 13 models this year. Kuo said Apple will then switch to a hole-punch display design for at least some 2022 iPhones, followed by the full-screen design in 2023. Android smartphone maker ZTE demoed the first under-screen facial recognition system a few months ago, proving that the feat is technologically possible.

While rumors have focused on new products like a Mini-LED iPad Pro coming at Apple's event on April 20, new spring-themed colors are also expected for select iPhone cases and Apple Watch bands.

Twitter user "Tommy Boi" recently shared a photo of some of the allegedly new iPhone 12 case colors, including Cantaloupe, Pistachio, Capri Blue, and Amethyst. The leaks have since continued, with Twitter user "Majin Bu" having shared a photo showing off three more allegedly new colors without names yet, including a sky blue, mustard yellow, and a red. The new spring colors will likely extend to Apple Watch bands such as the Sport Band and Solo Loop.

Anker, a company known for its range of accessories designed for Apple products, recently came out with one of the first MagSafe-compatible battery packs, so we thought we'd check it out to see how it compares to a standard battery pack.

With a 5,000mAh capacity, the battery pack can charge an iPhone 12 mini to full, but for other iPhones, you're only going to get a partial charge. Anker says it can charge the ‌iPhone 12‌ and 12 Pro to 95 percent and the iPhone 12 Pro Max to 75 percent, so it doesn't have as much capacity as other power banks on the market, but it's still a useful charge amount when you're in a pinch.

SSDGUY
Kinda holding out for an Apple display (something more affordable than the XDR) connected to a M1 mini or maybe an M1 MBP, but if they debut a 30" iMac I might just bite.
Score: 2 Votes (Like | Disagree)

Realityck
So many possibilities for April 20th, maybe too many. :D

Jimmy James
I really want to see the next round of macs.
Score: 2 Votes (Like | Disagree)

I doubt it. There are so many supply shortages globally right now. I think the earliest they’d mention it is at WWDC, but even then, I don’t think so. There’s already talk that the new iPad Pro will be extremely hard to get because of supply issues.

Just my guess though.
Score: 1 Votes (Like | Disagree)
Read All Comments

iPad Pro Getting Thicker in 2021 to Fit New Technology

Tuesday February 9, 2021 11:35 am PST by Hartley Charlton
Apple's affinity for thin and light product designs is well-known, so it is not often the case that the company chooses to make its existing products thicker. This year, Apple's largest and most expensive iPad offering, the 12.9-inch iPad Pro, is looking to buck the trend and get thicker, according to recent reports. Alleged factory CAD drawings leaked in January revealed that, as...
Read Full Article