The 21.5-inch iMac in both its non-4K and 4K offerings is experiencing dwindling availability at Apple Stores across the United States, with shipping dates for online orders of the non-4K model slipping by at least a week. 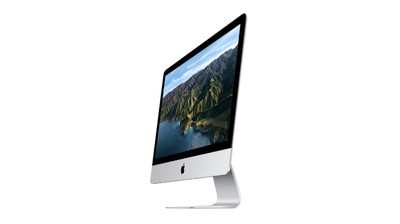 The higher-end 21.5-inch ‌iMac‌ with a 4K display is also experiencing a lack of availability at a few stores nationwide; however, it largely remains in stock. The larger 27-inch ‌iMac‌ remains available as normal.

Last month Apple discontinued two configurations of the standard 21.5-inch ‌iMac‌, possibly making way for new stock. Apple is rumored to be working on an all-new iMac design with a faster Apple silicon chip, but a specific release timeframe is unknown.

Next week on Tuesday, April 20, Apple will hold its "Spring Loaded" event where new iPad Pros are expected to be announced. However, whether or not the redesigned iMacs will make a debut at the event remains to be seen.

macduke
Just watch them put a 5400rpm HDD in the base 24” Apple Silicon iMac, lol. I would die laughing.
Score: 48 Votes (Like | Disagree)

MacFather
The last time they changed screen sizes and bezels on an iMac, this was the latest and greatest iPhone.

Caliber26
Come on Apple, my bussy is ready.
Score: 12 Votes (Like | Disagree)

appleguy123
I hope this doesn't mean that the smaller iMac will get the M1 and only the larger one will get the faster Pro chip
Score: 10 Votes (Like | Disagree)

I *hope* they will offer a low-end iMac with the M1. However, I think it's *extremely* unlikely that it'll be the best or only CPU they offer in the smaller model.
Score: 7 Votes (Like | Disagree)

Orange Bat
The iMac and an Apple TV are the only 2 things I’m hoping for. I’m eager to replace my sub-par Fire TV Cube as I sorely miss my older Apple TV. I’ll wait and see what the new iMacs have to offer before I purchase one. Otherwise, I can probably do just fine with a Mac Mini.
Score: 7 Votes (Like | Disagree)
Read All Comments

Friday May 7, 2021 6:55 am PDT by Sami Fathi
According to Apple leaker Jon Prosser, Apple's upcoming release of the MacBook Air will feature various colors, similar to the colors in the newly released 24-inch iMac. In the latest video of his YouTube channel Front Page Tech, Prosser says the same source who accurately provided him information on the first Apple silicon iMac coming in colors has told him that he recently saw a prototype...
Read Full Article • 345 comments

Sunday May 9, 2021 2:00 am PDT by Sami Fathi
Zoom, a hallmark platform used by millions during the global health crisis, has been given access to a special iPadOS API that allows the app to use the iPad camera while the app is in use in Split View multitasking mode. This case of special treatment was first brought to attention by app developer Jeremy Provost, who, in a blog post, explains that Zoom uses a special API that allows the...
Read Full Article • 273 comments