Parallels today announced the release of Parallels Desktop 16.5 for Mac with full support for M1 Macs, allowing for the Windows 10 ARM Insider Preview and ARM-based Linux distributions to be run in a virtual machine at native speeds on M1 Macs. 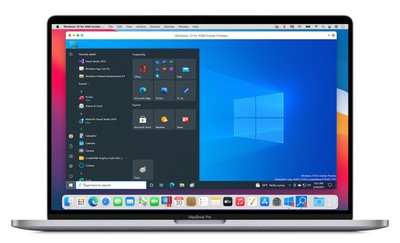 Microsoft does not yet offer a retail version of ARM-based Windows, with the Windows 10 ARM Insider Preview available on Microsoft's website for Windows Insider program members. The ability to run macOS Big Sur in a virtual machine is a feature that Parallels hopes to add support for in Parallels Desktop later this year as well.

Note: MacRumors is an affiliate partner with Paralles. When you click a link and make a purchase, we may receive a small payment, which helps us keep the site running.

I don't get the appeal.
If you need to run virtualized Windows, it's most likely you have a x86 application dependability. Windows 10 ARM will only execute x86 apps from the Windows store.

Here's my M1 MacBook Air, using Parallels to virtualize the ARM version of Windows 10, which is emulating an x86 version of an app that’s further emulating a PlayStation 2.

No - it's virtualisation, not emulation
Score: 18 Votes (Like | Disagree)

Mr. Dee
I wrote an article on Microsoft Community about how setup the Windows 10 ARM Insider Preview in the Parallels Desktop Preview on M1; the article got over 15k in views and Microsoft promptly deleted it. So, I suspect they don’t condone this.
Score: 16 Votes (Like | Disagree)

Can someone explain why it's impossible to emulate x86 on an M1 processor? VirtualPC was able to do it on a PowerPC processor.

GubbyMan
Now I wanna see a comparison between the M1 Macbook Air and a Windows laptop running x86 applications.
Score: 14 Votes (Like | Disagree)

Here's my M1 MacBook Air, using Parallels to virtualize the ARM version of Windows 10, which is emulating an x86 version of an app that’s further emulating a PlayStation 2.

Otherwise known as the matryoshka rig.
Score: 13 Votes (Like | Disagree)
Read All Comments