While the German cities of Cologne, Hamburg, Munich, and Frankfurt have more than one Apple Store, the capital Berlin has only one – Apple Kurfürstendamm, which opened in 2013. That looks set to change soon, however. 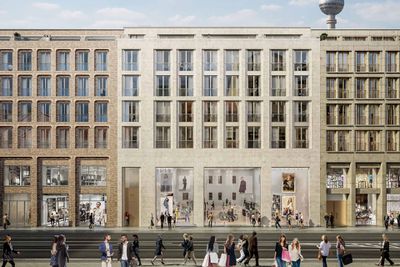 Render of 43-45 Rosenthaler Straße by project developer Values Real Estate
Speculation that Apple could settle in the eastern part of Germany's largest city has been around for several years, but recent construction work at a site in the Mitte district purchased by project developers Values Real Estate has offered up concrete evidence to indicate the exact location of Apple's second Berlin store.

iFun.de reports that Apple is preparing a second store in the eastern part of Berlin, at 43-45 Rosenthaler Straße. Values Real Estate announced in 2018 that it would tear down several old GDR buildings in Rosenthaler Straße and create a new three-part building, with office, residential and business shares in the vacant space.

The construction site is close to the Spree river, within walking distance of Alexanderplatz, and was recently covered in the kind of black wood paneling that Apple has used before. The large glass fronts that extend from the ground floor to the second floor of the neighboring buildings are clearly reminiscent of Apple's store aesthetics.

Photos depict the recess in the large glass front above the entrance door that's needed to install the luminous Apple logo. Other shots suggest that while construction is progressing, the opening of the store is likely months away yet.

There's so much graffiti in Berlin now. Horrible to see. Any development that delays even more graffiti is good news

WTF are you talking about, have you any idea how many graffiti there are in Berlin, and how important they were and still are for the history and the culture of this city?
Score: 5 Votes (Like | Disagree)

nothingtoseehere
This is a location that - how shall I put it? - suits Apple. The proximity to Alexanderplatz is one thing, much more close is Hackesche Höfe. This area is very popular with affluent young and middle-aged urban people, including tourists, so it fits into Apple's target audience.
Given the sad condition of the coronavirus vaccination campaign in Germany, it will not matter when the construction work takes several more months...
Score: 5 Votes (Like | Disagree)

Please also build another one in central Stuttgart; it’d be much easier than having to travel out to Sindelfingen.

Burebista
If only european prices were a tad more palatable...I remember walking into the Apple store on Kudamm a couple of years ago, and noping right back out of it
Score: 4 Votes (Like | Disagree)

Thursday March 18, 2021 11:39 am PDT by Juli Clover
Developers need to look out for "XcodeSpy," a malicious Xcode project that installs a custom variant of the "EggShell" backdoor on a macOS computer, according to new research shared today by SentinelOne (via Ars Technica). Xcode is software designed for developers who want to write apps for the iOS and macOS platforms, and the malicious project that's circulating mirrors TabBarInteraction, a ...
Read Full Article • 17 comments

Monday March 1, 2021 9:24 am PST by Juli Clover
All 270 Apple retail stores in the United States have been reopened as of today, marking the first time that Apple has had all locations operational since stores began closing in March 2020. When the first shutdowns occurred on March 14, 2020, Apple initially planned to reopen stores starting on March 27th, but that did not happen and stores have been opening and closing on a rotating basis...
Read Full Article • 131 comments

Wednesday June 2, 2021 5:51 am PDT by Sami Fathi
Apple has lost "several" top managers from its internal Apple Car project, codenamed "Project Titan," causing a potential setback to the launch of the self-driving car, according to a new report from Bloomberg. From the report: Apple Inc. has lost multiple top managers of its self-driving car team in recent months, a sign of attrition at the division involved in what could become an...
Read Full Article • 44 comments

Thursday May 13, 2021 12:10 am PDT by Sami Fathi
Apple has fired Antonio García Martínez, an ex-Facebook product manager and author of the controversial book "Chaos Monkeys," following public and internal calls for removal and investigation due to past misogynistic statements, The Verge reports. Apple hired Martínez earlier this week to join its ads team, however, comments that Martínez made in the past sparked condemnation from users...
Read Full Article • 388 comments