Procter & Gamble Co. was one of the companies that worked with the China Advertising Association to test a new data collection tool designed to get around Apple's App Tracking Transparency rules, reports The Wall Street Journal. 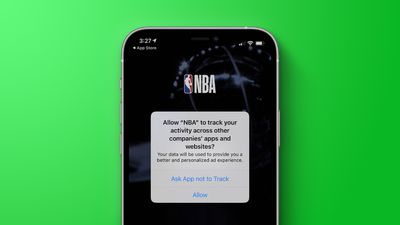 The state-backed China Advertising Agency developed a new method of tracking users called CAID to replace access to the IDFA or advertising identifier of an iPhone or iPad. Starting with iOS 14.5, Apple will not let apps access the IDFA of a device without express user permission, which will have an impact on cross-app and cross-website tracking used for ad targeting.

CAID has been in testing in China with major companies like Baidu, ByteDance (TikTok), and Tencent, as well as Proctor and Gamble. Apple in mid-March began warning developers not to circumvent App Tracking Transparency rules with methods like CAID. Apple has told developers that attempting to get around the new ad tracking restrictions will result in removal from the App Store.

"The ‌App Store‌ terms and guidelines apply equally to all developers around the world, including Apple," an Apple spokesperson told The Wall Street Journal. "We believe strongly that users should be asked for their permission before being tracked. Apps that are found to disregard the user's choice will be rejected."

As a major worldwide advertiser, P&G has a vested interest in tracking users, and is the biggest Western company involved in the efforts to create an App Tracking Transparency alternative. P&G owns many major brands that include Gillette, Charmin, Pampers, Tide, Bounty, Pantene, Crest, Febreeze, and tons more.

In a statement, P&G told The Wall Street Journal that it is providing input to the China Advertising Agency in an effort to "deliver useful content consumers want in a way that prioritizes data privacy, transparency and consent." Delivering useful content to consumers "means partnering with platforms and publishers--both directly and through our advertising associations across the globe."

P&G maintains its own consumer database that does not rely on Facebook, Google, and other ad platforms. According to The Wall Street Journal, P&G has built a database of 1.5 million customers worldwide using a combination of anonymous consumer IDs and personal information that customers share. P&G largely uses this database in China, where it spends 80 percent of its digital ad buying on targeted ads.

P&G declined to offer additional details on the CAID tool and did not say whether it will use the technology. It is not yet clear how Apple will respond to CAID if some of the biggest companies in the world adopt the ad tracking alternative. When news about the warnings to Chinese developers came out, a Chinese marketing industry veteran said that Apple's actions could "put a stop" to CAID testing.

Other U.S. companies that include Deloitte, PricewaterhouseCoopers, and Nielsen are also working with the China Advertising Agency on CAID.

Here are the facts: P&G - along with 30 others - participated in discussions about developing additional ways to reach Chinese consumers with digital ads. Like all our work in this area, our input prioritized data privacy, transparency and consent for consumers - priorities we have long advocated for as the entire industry modernizes the way it reaches consumers with digital advertising. The principles and standards of this effort were also publicly available, clearly stating that the proposed industry effort - called CAID - can be turned on and off by consumers, protect user data, and not be linked to personal information.

easy4lif
Gonna add on last thing, any company caught violating app transparency rules should be kicked from the App Store for one year. A second offense, 2 years. and if caught a third time...

dannyyankou
Well good thing I switched from Tide to All detergent a long time ago, I think it’s better and cheaper.

Let’s see what other P&G products I can detox myself of
Score: 13 Votes (Like | Disagree)

Shady, hope Apple will stand its ground when developers break the rule.

You might check the article, Bounty is a MARS product.
See screenshot.

Monday May 17, 2021 1:46 pm PDT by Juli Clover
Apple has been making concessions on privacy and security in order to continue building and selling its devices in China, according to an in-depth report from The New York Times. The focal point of the report is Apple's decision to comply with a 2016 law that requires all personal information and data collected in China to be kept in China, which has led Apple to build a China data center...
Read Full Article • 161 comments

Tuesday March 16, 2021 4:27 am PDT by Tim Hardwick
Apple plans to begin enforcing its App Tracking Transparency changes following the release of iOS 14.5, and all apps that access an iPhone's ad identifier or IDFA will need to ask a user's permission before tracking is allowed. According to a new report by the Financial Times, however, the state-backed China Advertising Association (CAA) is testing a tool that could be used to bypass the new ...
Read Full Article • 43 comments