Apple is opposing the trademarking of a bottled water business's logo since it argues that it can be easily mistaken for its own (via Law Street). 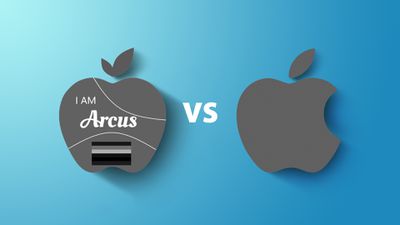 Apple filed a notice of opposition with the Trademark Trial and Appeal Board against Georgette LLC's logo, asserting that its brand will be damaged if the applicant's logo is registered because of dilution and the likelihood of consumer confusion, mistake, or deception.

Georgette's logo depicts a whole apple with the words "I am Arcus" over it, and with two leaves. Apple's logo, on the other hand, has a bite out of its right-hand side, and a single leaf. Apple says that the applicant's logo "features a stylized apple design with a right-angled, detached leaf, rendering it visually similar to Apple's famous Apple Marks."

An image enclosed in the filing overlays Georgette's logo with Apple's logo, to reveal that they are even dimensionally similar.

Apple argues that since 1977 it has used its logo, which has gone on to become distinctive and gain a high level of consumer recognition and goodwill.

Applicant's Mark readily calls to mind Apple's famous Apple Logo given the visual similarities, and the Apple Marks are so famous and instantly recognizable that the similarities in Applicant's Mark will overshadow any minor differences and cause the ordinary consumer to believe that Applicant is related to, affiliated with or endorsed by Apple.

Beyond the obvious similarities between Apple's logo and that of Georgette, Apple is also arguing that it sells "goods related to beverages" featuring its logo, including mugs, thermal bottles, and water bottles, such as those available to customers exclusively at the Apple Park Visitor Center. Since Georgette wants to trademark its logo for "purified drinking water; bottled water," Apple believes this is even greater grounds to refuse the application.

Last year, Apple initiated trademark litigation with a small company called "Prepear," arguing that its pear-shaped logo was too similar to its own mark. Prepear ultimately changed its logo to bring the dispute to an end, but Apple continues to fiercely guard the trademark of its logo.

Sneakz
Yeah, gotta side with Apple on this one. That overlay says it all.
Score: 62 Votes (Like | Disagree)

AngerDanger
Wow, yeah, the random design elements on top of the logo really distract from how similar the silhouettes are.

Looks like they put some lines, text, and a monochrome pride flag over the Apple logo.

Apple’s legal team doesn’t have enough to do so they start these ridiculous cases.

I'd say that Apple has a case here. Not saying that Apple will win in court, but they do have a case to make.
Score: 24 Votes (Like | Disagree)

Blackstick
If I had a small bottled water business where legal fees could doom it, I'd stay away from the Apple logo as much as I would Coca-Cola's iconic, contoured glass bottle shape.
Score: 23 Votes (Like | Disagree)

I realise Apple has to do this (trademarks require active protection to prevent their loss) - but megacorps owning the rights and trade dress to everyday objects is terrible for human freedom.
Welcome to the dystopian future - brought to you Coca-Cola, Apple, amazon, and OmniCorp...

Well, Apple doesn't own the rights to an apple in all its shapes and forms, but to a rendition of it. Changing one of two features does not change that the underlying logo is virtually identical to Apple's.
Score: 22 Votes (Like | Disagree)

Goldfrapp
What a lazy a** logo job
Score: 22 Votes (Like | Disagree)
Read All Comments

Thursday February 3, 2022 5:41 am PST by Hartley Charlton
A federal judge in the U.S. has dismissed a proposed class-action lawsuit that accused Apple of misleading customers about the iPhone's water resistance (via Reuters). Apple has extensively advertised the water resistance of the iPhone in its marketing campaigns since the launch of the iPhone 7, including the claim that some models can survive depths of up to four meters for 30 minutes....
Read Full Article • 111 comments

Tuesday October 12, 2021 9:57 am PDT by Juli Clover
Apple just announced its second fall event, which is set to take place on Monday, October 18. As usual, the Apple Events webpage features an augmented reality logo that you can see when viewing the page on an iOS device. Open up the Apple Events page on an iPhone or an iPad and then tap on the logo to open the augmented reality interface. Apple asks you to scan around the room and then...
Read Full Article • 34 comments

Wednesday March 2, 2022 6:39 am PST by Joe Rossignol
While the Beats Pill+ was discontinued a few months ago, the portable Bluetooth speaker is making a comeback with a new limited-edition model. Beats has collaborated with fashion brand Stüssy on a limited-edition Beats Pill+ speaker featuring a skull-and-bones design and the Stüssy logo. An engraved message on the top of the speaker says "the only good system is a sound system." The...
Read Full Article • 34 comments