Facebook Pay is expanding on its service by rolling out person-to-person payments via QR codes, allowing users to scan a friend or family member's QR code, and instantly transfer money. 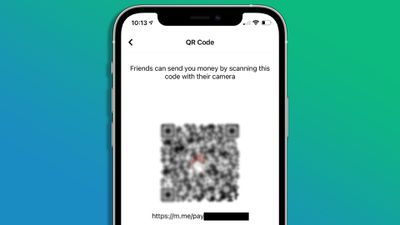 Facebook Pay launched in 2019 as an easy and convenient service for people to transfer money to friends and family, pay businesses, purchase products, and more. It's integrated into all of Facebook's apps, including Facebook, Messenger, Instagram, and WhatsApp. At launch, Facebook Pay had already supported person-to-person payments via Messenger and the Facebook app, and now the social media giant is now hoping to target physical person-to-person payments.

As first discovered by MacRumors contributor Steve Moser, users will be prompted with a new "Scan" button in their Facebook Pay carousel. Pressing it allows users to scan a QR code for a friend or family member, select the amount, and transfer the money. Additionally, Facebook Pay is also introducing personalized payment links, which automatically direct others to a secure page to transfer money to your account.

Scott Harkey, chief strategy officer and head of financial services and payments at Levvel and who worked with Apple for its expansion of Apple Pay, tells MacRumors that despite Facebook's intention, it has work to do around changing people's perception that Facebook Pay is, and can be, a mainstream way to pay.

At the end of the day, payment methods have to solve a problem and be easier or more beneficial than existing methods. If someone does a lot of buying on Facebook Marketplace or buys a lot of things from Facebook adds, then you can see how a stored credential and in-app payment mechanism would be the most convenient. However, it’s not clear to me why someone would use Facebook QR code for P2P in person. I don’t believe many people currently think of Facebook as a way to transact or transfer money, and Facebook would need to change that perception in order for them to have any meaningful traction in the US.

Facebook Pay continues to expand globally, and a list of where and on which Facebook-owned apps the service is available can be found on its website.

Update 12:30 pm: According to sources, the QR code feature of Facebook Pay is still in testing for users in the United States and has yet to be officially launched.

AlliFlowers
And further down the front page we find an article about Facebook being hacked and exposing millions of users' data. Is this a company anyone would chose to handle money? Seriously?
Score: 65 Votes (Like | Disagree)

BJMRamage
I have Facebook Pay...it is very easy to use.
I have sent thousands of dollars so far.
Well, not me, somebody else keeps doing it on my account.
seems strange.

also Zuckerberg: “Hey, have you heard about Facebook Pay?”

TheYayAreaLiving ?
No way I’m trusting this. Stay away people.
Score: 10 Votes (Like | Disagree)

macsplusmacs
and let facebook know everything I buy with it?