Images shared by Japanese site Mac Otakara claim to show a 3D-printed mockup of the upcoming 6.1-inch iPhone 13 Pro with a smaller notch, and repositioned earpiece and front camera, but with minimal changes otherwise. 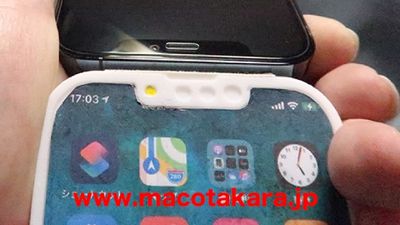 According to the images, Apple plans to move the earpiece to the top of the notch within the screen bezel, lining up with a previous photo shared by MacRumors that shows the same design change.

‌Mac Otakara‌ has also shared specific dimensions of the notch for the upcoming ‌iPhone 13 Pro‌, demonstrating how much the notch is expected to shrink. Compared to the iPhone 12 Pro, the mockup suggests the 2021 Pro iPhone will feature a notch that is 5.35 mm in height vs. 5.30 mm for the ‌iPhone 12‌ Pro, and 26.80 mm in width, down from 34.83 mm. Visually, the notch will be smaller in width but will be slightly taller.

Rumors about a smaller notch have been present since the launch of the ‌iPhone‌ X, which first introduced the TrueDepth system and the notch. Apple may be able to reduce the footprint of the notch thanks to the relocation of the earpiece and the repositioning of the front camera. Other than the reduced notch, the images shared by Macotakara reveal no changes to the rear camera or other aspects of the ‌iPhone‌'s design.

the kid who did the glueing is going places
Score: 42 Votes (Like | Disagree)

BreakingKayfabe
We’re really reaching to get excited about the iPhone 13.

I haven’t found myself at any point hoping the notch would get smaller.
Score: 30 Votes (Like | Disagree)

JetLaw
I can confirm that the mock-up is real. I made it last week during my kindergarten arts and crafts camp.
Score: 26 Votes (Like | Disagree)

jz0309
So unless there’s more information displayed, what’s the benefit. I understand that technology evolves but don’t see the big deal here.
And the mock-up sucks
Score: 18 Votes (Like | Disagree)

techfreak23
It’s not much, but it should give us back the battery percentage always showing. That’s the only thing that’s ever really bothered me about the notch. Otherwise, I don’t notice it or look at it.
Score: 16 Votes (Like | Disagree)
Read All Comments