Apple is once again closing all of its retail locations in France due to the ongoing health crisis, the first time since last year where all 20 locations have been closed, MacGeneration reports. 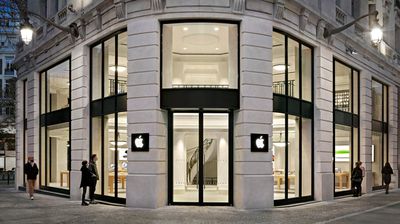 France currently remains on heightened alert due to the pandemic, with some regions under stricter lockdowns than others. The majority of Apple Stores in the country have remained closed, while others such as Apple Champs-Élysées, Apple Opéra, Apple Marché Saint-Germain, and Apple Lille, remained open for customers according to MacGeneration.

Apple says that the closures will be temporary and offers no date for when customers can expect them to reopen. Stores that were open previously, such as Apple Champs-Élysées and Apple Opéra, will remain open until Saturday, April 3, for customers to pick up current online orders or attend a Genius Bar appointment that was scheduled before April 3.

However, even with stores open, Apple has in place strict measures such as social distancing, mask-wearing, and temperature checks. Apple has taken a cautious approach to closing and reopening its stores as the pandemic situation differs. As of March 1, all 270 Apple Stores in the United States are open.

RickDEGH
It’s enough already! Can’t imagine how many folks are going to come down with mental illnesses post COVID.
Score: 26 Votes (Like | Disagree)

miniyou64
Yes, the world would be much safer if we just locked ourselves inside forever
Score: 21 Votes (Like | Disagree)

You mean like the people who are losing close ones because people are incapable of following simple rules? Or do you mean the doctors and nurses being overworked in every single hospital in terrible conditions having to oversee the deaths hundreds of people while being helpless?

You are not describing planet earth. You can check hospital capacity for most US states. Never did any state reach full capacity. Some hospitals lacked appropriate PPE in the first few months but that hasn’t been the case for a long time. If you work in an ICU you see hundreds of people die every year.

Also for the 1000000th time: masks and other behaviors are weak mitigation strategies that simply slow the virus (to give time for vaccine). They do not prevent the virus completely. There is no world in which the US,after it got to a huge diverse cosmopolitan nation, where we “follow the rules” and it just disappears. That’s never been done for a virus of this type and it never will be. It’s just wishing and trying to find someone to blame. It makes as much sense as blaming people for earthquakes. This didn’t happen in any other countries outside of homogeneous island nations.
Score: 15 Votes (Like | Disagree)

Homeopathy is a scam with no ingredients.

The vaccine is the only way out of this long term.
Score: 10 Votes (Like | Disagree)

contacos
The EU is such a flop when it comes to the whole mess that was and is the distribution of vaccines. It’s embarrassing. Thank god the weather is improving cuz I am about to loose my damn mind in Germany. Everything has been closed since November with the exceptions of some silly ideas like „Click & Meet“. Yes I am totally going to make an appointment to be able to shop at one store for 10 minutes. Totally gonna bother to go downtown for that. NOT
Score: 10 Votes (Like | Disagree)
Read All Comments

Friday November 19, 2021 1:32 pm PST by Juli Clover
Apple today opened a new retail location in the Los Angeles area with the official launch of Apple The Grove. Apple has had an Apple Store in The Grove shopping area for close to 20 years, but the recently opened store is in a new location. To celebrate the relocation of Apple The Grove, Apple last night hosted a Q&A event with the cast of popular Apple TV+ show "Ted Lasso," including Jason...
Read Full Article • 59 comments

Apple Stores to Drop Mask Requirement for Customers in Many U.S. States

Thursday November 4, 2021 11:31 am PDT by Juli Clover
Apple will no longer require customers to wear a mask to enter many of its retail stores in the United States, reports Bloomberg. Mask mandates will disappear at several stores starting on Friday due to positive trends in vaccinations and declining COVID-19 cases. More than 100 stores will drop the mask mandate starting Friday, with the policy then expanding to additional stores based on...
Read Full Article

Monday December 27, 2021 9:27 am PST by Joe Rossignol
As COVID-19 cases continue to rise, the number of Apple retail stores in the U.S. that are temporarily closed today has surpassed 20. Not all of the closures are related to the virus, with five stores closed in Washington state following inclement weather. The latest high-profile locations to be shut for business include Apple Carnegie Library in Washington, D.C., Apple Century City in Los...
Read Full Article