Today marks the 45th anniversary of Apple, co-founded by Steve Jobs, Steve Wozniak, and Ronald Wayne on April 1, 1976. Wayne sold his 10% share of the company back to Jobs and Wozniak just 12 days later to avoid financial risk, which is unfortunate in hindsight given that his stake would be worth more than $200 billion today. 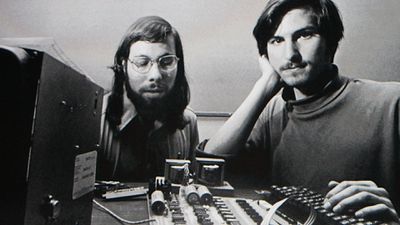 Apple's history began in the garage of Jobs' childhood home in Los Altos, California, where he worked with Wozniak to test the first Apple I computer systems in 1975. Jobs then reached a sales agreement with a small computer store named the Byte Shop in nearby Mountain View, California, which began selling the Apple I in July 1976 for $666.66. Wozniak later said he chose that price because he liked repeating digits.

From near-bankruptcy in the late 1990s to becoming the world's most valuable public company by the 2010s, Apple has been through a series of highs and lows over the past four and a half decades. The company has introduced several iconic products over that time, most notably including the Macintosh in 1984, the iPod in 2001, and the iPhone in 2007, with Jobs becoming well known for his charismatic keynote presentations.

As Apple celebrates 45 years today, I’m reminded of Steve’s words from many years ago: “It’s been an amazing journey so far, yet we have barely begun.” Thanks to every member of our Apple family for all you’ve done to enrich lives. Here’s to the next 45 years & beyond! — Tim Cook (@tim_cook) April 1, 2021

Apple recently capped off its most financially successful year ever with a record $111 billion revenue in the fourth quarter of 2020. The company is now valued at over $2 trillion, and its future is expected to include greater pushes into areas like AR/VR and artificial intelligence as technology continues to evolve beyond screens.
[ 102 comments ]

dc.lotus
Anytime you kick yourself for not buying AAPL sooner, you can always console yourself with "well, at least I'm not Ron Wayne."
Score: 35 Votes (Like | Disagree)

Better than “hppy 445 bthdy“ with your butterfly keyboard ?
Score: 27 Votes (Like | Disagree)

Is Woz seen as a bit of a liability then these days? No mention of him in the credit.

I doubt it, there would be NO Apple without him.

It was the combination of the two, with very little Overlap, that made Apple the early success that it was.
Score: 10 Votes (Like | Disagree)

Cosmosent
The first 1/3 OR so of the Steve Jobs bio by Walter Isaacson is a fantastic read !
Score: 8 Votes (Like | Disagree)