Major carriers in the U.S. like Verizon, T-Mobile, and AT&T have made a change to how SMS messages are routed to put a stop to a security vulnerability that allowed hackers to reroute texts, reports Motherboard. 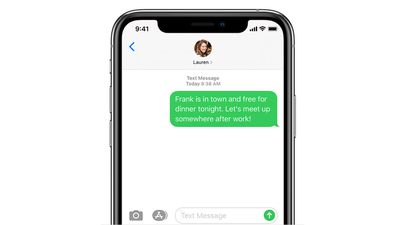 Carriers introduced the change after a Motherboard investigation last week revealed how easy it is for hackers to reroute text messages and use the stolen information to break into social media accounts. The site paid a hacker $16 to reroute texts using the tools of a company called Sakari, which helps businesses with mass marketing.

Sakari offered a text rerouting tool from a company called Bandwidth, which was supplied by another company called NetNumber, resulting in a confusing network of companies contributing to a vulnerability that left SMS texts open to hackers (Motherboard has more information on the process in its original article). The hacker hired by Motherboard was able to access Sakari's tools without any authentication or consent from the rerouting target, successfully getting texts from Motherboard's test phone.

Sakari is meant to allow businesses to import their own phone number for sending mass texts, which means a business is able to add a phone number to send and receive texts through the Sakari platform. Hackers could abuse this tool by importing a phone number of a victim to get access to the person's text messages.

Aerialink, a communications company that helps route text messages, said today said that wireless carriers are no longer supporting SMS or MMS text enabling on wireless numbers, something that "affects all SMS providers in the mobile ecosystem." This will prevent the hack demonstrated by Motherboard last week from working.

It is not clear if this text rerouting method was widely used by hackers, but it was easier to pull off than other smartphone hacking methods like SIM swapping. A Security Research Labs researcher said that he had not seen it before, while another researcher said it was "absolutely" in use.

nutmac
I wish I can disable SMS 2FA across the board. Many financial institutions require it.
Score: 17 Votes (Like | Disagree)

DocklandNightShift
I try not to use SMS. It’s either iMessage or Signal for me. more people need to realize how utterly open and non private normal texting is
Score: 17 Votes (Like | Disagree)

zorinlynx
This is the kind of thing where you're reading the article and asking yourself:

- Why was this possible in the first place??
- If the carriers were able to prevent this from happening, why weren't they already doing so????!!?!11

I swear, our security infrastructure is so fragile. It's only a matter of time before something really, really bad happens.
Score: 15 Votes (Like | Disagree)

I wish I can disable SMS 2FA across the board. Many financial institutions require it.

Yep. It's a complete joke that you can't secure the most important accounts properly. I'm now using a Google Voice number for 2FA in those cases (no SIM swapping or number porting possible). But they should really offer more secure methods.
Score: 6 Votes (Like | Disagree)
Read All Comments

Wednesday February 2, 2022 4:21 am PST by Tim Hardwick
WhatsApp's plan to bring iMessage-style message reactions to the massively popular chat platform appears to be entering its final stages, based on new screenshots shared by WABetaInfo. WhatsApp has been working on message reactions – or "Tapbacks" in Apple Messages parlance – for some time, with evidence of their development first coming to light last summer. The feature gives...
Read Full Article • 34 comments

iPhone 14 With eSIM Only Will Likely Be Optional Model, Says Analyst

Wednesday January 26, 2022 6:35 am PST by Joe Rossignol
Last month, a tipster informed MacRumors that Apple had advised major U.S. carriers to prepare for the launch of eSIM-only smartphones by September 2022, suggesting at least one iPhone 14 model might lack a physical nano-SIM card tray. GlobalData analyst Emma Mohr-McClune today expressed her belief that Apple will not switch to eSIM-only iPhones entirely right away, but rather offer an...
Read Full Article • 104 comments

Thursday March 17, 2022 2:50 pm PDT by Juli Clover
Apple is streamlining its iPhone purchase process with the launch of the iPhone SE, and has introduced a new buying method that allows customers to purchase T-Mobile and AT&T devices without inputting their current carrier information. As outlined by Bloomberg, customers typically need to provide their wireless phone number and social security number when making an iPhone purchase, a process ...
Read Full Article • 24 comments