There was a major issue with Shortcuts earlier this week, which prevented all Shortcut links shared through iCloud to stop working properly. Apple has now fixed the problem, and links to Shortcuts on the web should be largely functional again. 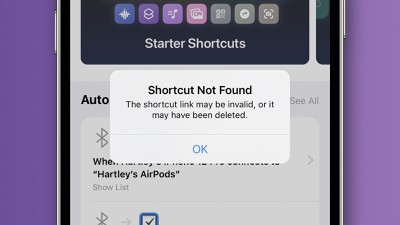 The Shortcut issue affected links to shared shortcuts that were created prior to the last couple of weeks. When attempting to download a Shortcut from one of these links, there was an error about the shortcut link being invalid.

This impacted many websites that share various Shortcuts, such as MacStories, which houses a repository of useful shortcuts created by Federico Viticci. Last night, Apple told Viticci it was working on a fix to restore the broken shortcuts.

As of this morning, Viticci said that many of the MacStories shortcuts are once again functional, and we can confirm that most of the Shortcut links we tested from MacStories, RoutineHub, and Reddit are working.

Apple has begun restoring links to old shortcuts. Some links in the @macstoriesnet Shortcuts Archive are still broken, but a lot of them are active again.https://t.co/MGwB1bRhHD pic.twitter.com/CGp9VsIBkW — Federico Viticci (@viticci) March 25, 2021

We recently shared a video on some handy iPhone and iPad shortcuts for everything from editing photos to adding frames to screenshots to dictating notes, and the links to those shortcuts are all functional again.
Tag: Shortcuts
[ 3 comments ]

There was a major issue with Shortcuts earlier this week, which prevented all Shortcut links shared through iCloud to stop working properly.

anshuvorty
I think this is an App Store-wide issue because I can't access the MAS!

Friday June 18, 2021 9:16 am PDT by Joe Rossignol
Apple this week stopped selling its Magic Keyboard with Numeric Keypad, Magic Mouse 2, and Magic Trackpad 2 accessories for the Mac in a Space Gray color, around three months after discontinuing the iMac Pro, which also came in Space Gray. Last month, Apple listed the Space Gray accessories as available while supplies last, and the company has now removed the product pages from its website...
Read Full Article • 128 comments