Apple Fined $2 Million in Brazil for Selling iPhones Without Chargers

Apple has been slapped with a near $2 million fine in the Brazilian state of São Paulo over violations of the Consumer Law Code due to the lack of a charger in the box for newer iPhones, Brazilian tech news outlet Tilt reports. 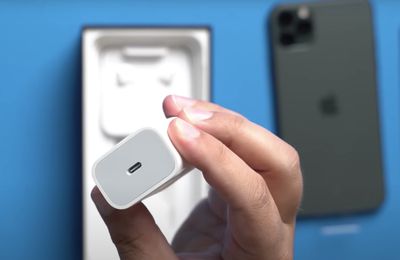 In December, the Brazilian agency informed Apple that selling an iPhone in the country without a charger in the box is a violation of the Consumer Defense Code. Apple responded to the agency's concerns by saying that most customers already have spare adapters and that providing another one in the box is unneeded.

Fernando Capez, Procon-SP's executive director, offered a stern warning to Apple following the fine, saying that it needs to respect and understand Brazilian consumer law and institutions. Alongside the lack of a charger, Apple is also being fined for misleading customers about the water resistance in iPhones.

Since the ‌iPhone‌ 7, iPhones have been water-resistant to different specifications. The more recent ‌iPhone 12‌ series, for example, is certified for water submersion of up to 6 meters for as long as 30 minutes.

Procon-SP claims that Apple refused to repair devices for customers who had suffered water damage with their "water-resistant" iPhones, even though they're under warranty. Other charges brought forward to Apple are claims that it deliberately slows down older phones with iOS updates to encourage customers to purchase newer models.

Apple will have a chance to appeal to the $2 million fine. We've reached out to Apple for comment and will update this article if we hear back.

if anything, they make more electronic waste by including a cable that doesn’t work with the adapters most people Apple claims to already have ?
Score: 96 Votes (Like | Disagree)

obamtl
I laud Apple’s desire to protect the environment. Making the iPhone box smaller is a good thing, and reducing unused charger bricks is a good thing. BUT if the environment were all that they were concerned about, then they can ask customers when buying an iPhone IF they want a charger, and include a charger in a smaller separate box for free, thus reducing the shipping volume all the same. It’s charging for the charger many will need that’s unacceptable, and I’m glad Brazil’s held them to account for that.
Score: 71 Votes (Like | Disagree)

adrianlondon
"Apple responded to the agency's concerns by saying that most customers already have spare adapters and that providing another one in the box is unneeded."

If that were the only reason then they'd allow people to add one to their order for free.
Score: 68 Votes (Like | Disagree)

"Apple responded to the agency's concerns by saying that most customers already have spare adapters and that providing another one in the box is unneeded."

If that were the only reason then they'd allow people to add one to their order for free.

especially since the included cable doesn’t even work with those adapters people supposedly already have. Such marketing PR BS from Apple. They just want to sell MagSafe accessories
Score: 54 Votes (Like | Disagree)

NIKKG
Good, they should fine them even more for being so greedy.
Score: 47 Votes (Like | Disagree)

Suckfest 9001
Once again, this is great news. I’m glad some countries are at least realizing what a dumb move this is fuelled entirely by financial motivation and nothing to do with environmental impact.

They changed the charger the same time they got rid of it from the box. Tell me more about how we’re supposed to use our existing USBC bricks that we got with our iPhone….?

They sell charger bricks separately in a ton of packaging and at exorbitant prices and they just got called out for it.