With iOS and iPadOS 14.5 scheduled for an early spring release, Apple has begun testing a new feature that could provide Apple Maps users with real-time crowd data for points of interest, similar to Google Maps. 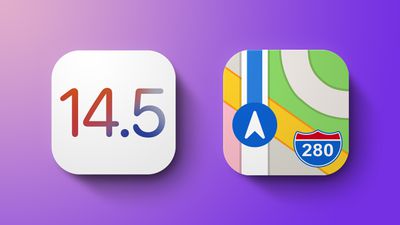 In the iOS and iPadOS 14.5 beta, an updated section in the "Location Services" menu of Apple's Privacy settings states that Apple will collect data from users, such as when a specific app is opened near a point of interest, to determine how crowded the location is, and whether that specific business is open:

Routing and Traffic: While you are in transit (for example, walking or driving), your iPhone will periodically send GPS data, travel speed and barometric pressure information in an anonymous and encrypted form to Apple, to be used for augmenting crowd-sourced road traffic and atmospheric correction databases. Additionally, when you open an app near a point of interest (for example, a business or park), your iPhone will send location data in an anonymous and encrypted form to Apple, which Apple may aggregate and use to let users know if that point of interest is open and how busy it is.

The wording suggests that if a user opens an app for a specific business or service near a related point of interest on ‌Apple Maps‌, Apple may aggregate that data to possibly inform other users of how crowded that location is and whether the business/service is operating. Notably, Apple says it will only collect anonymized and encrypted data from users when the "Routing and Traffic" setting is turned on within Location Services -> System Services.

Currently, ‌Apple Maps‌ offers no front-facing interface for displaying this data to users. The lack of the feature on the visual front and Apple's wording implies that Apple is testing and collecting data to potentially launch a related feature in the official public release of iOS 14.5, or perhaps in a release subsequent to it.

Google Maps Live Crowd Data
Google Maps already offers a similar real-time feature called Live Visit Data that informs users of how busy a specific store or business is at a particular time. Google provides this data by gathering aggregated and anonymized data from users who have opted in to Google Location History.

Already present in iOS 14.5 beta is the ability for users to crowdsource car accidents, speed traps, and hazards within ‌Apple Maps‌. The new addition to ‌Apple Maps‌ joins an already extensive list of features in iOS and iPadOS 14.5, including App Tracking Transparency, the ability to unlock your iPhone with a mask, and more. Apple says the update will roll out to all users in the "early spring."

RedTheReader
It’s been nice seeing Apple Maps go from what it was back in 2012 to a legitimate Google Maps competitor. Unfortunately, the stigma seems to be buried in deep: most people I see talking about it still don’t think it’s dependable.
Score: 13 Votes (Like | Disagree)

Nothing to do with stigma IMO. It simply isn't anything like as mature or functional a product as Google Maps.

Have never used Google Map since Apple Map launched and so far I haven't been lost once.
Score: 13 Votes (Like | Disagree)

It’s been nice seeing Apple Maps go from what it was back in 2012 to a legitimate Google Maps competitor. Unfortunately, the stigma seems to be buried in deep: most people I see talking about it still don’t think it’s dependable.

Nothing to do with stigma IMO. It simply isn't anything like as mature or functional a product as Google Maps.
Score: 7 Votes (Like | Disagree)

Brian Y
Given how hard Apple are playing the privacy card, this needs to be opt-in. Even Google have this as an opt-in feature.
Score: 6 Votes (Like | Disagree)

The only real-time point of interest I'd like to be aware of are speed traps like Waze provides.

Right there in the article
"Already present in iOS 14.5 beta is the ability for users to crowdsource car accidents, speed traps, and hazards within Apple Maps."
Score: 6 Votes (Like | Disagree)

uptownnyc
The only real-time point of interest I'd like to be aware of are speed traps like Waze provides.
Score: 5 Votes (Like | Disagree)
Read All Comments