Apple says its App Store now supports more than 330,000 jobs in the U.K., a 10% increase over the past year, despite the pressures of the global health crisis on the nation's economy. 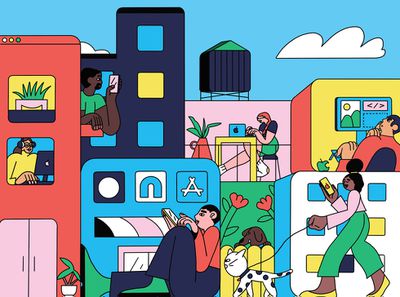 According to Apple, 2020 was a "breakthrough year" for the iOS app economy, with developers in the U.K. generating more than £3.6 billion in total earnings, which represents 22% in growth compared to the previous year. The company says a similar trend was reflected in Europe, where the iOS app economy has grown to support 1.7 million jobs – a 7% percent increase since 2019. Apple published similar press releases in Germany and France, claiming that the ‌App Store‌ supports over a quarter of a million jobs in each of those two countries.

Growth in the UK was driven by the innovations and breakthrough success of UK developers, whose apps users relied on for learning, working out, keeping track of their health, or finding ways to stay connected and entertained. During the pandemic, people turned to UK workout apps like One You Couch to 5K, fitness plan app Fiit, and sleep support app Sleepiest Sleep Sounds Stories. UK developer Moshi, a sleep and mindfulness app for children, has seen a rapid growth in downloads and subscriptions over the last year, leading to a 50 percent expansion of its team with 10 new hires.

"In a year like no other, the UK has remained a vibrant and innovative hub for entrepreneurs and app developers," said Christopher Moser, senior director of the App Store. "More people in the UK than ever before are working as part of the iOS app ecosystem, creating exciting apps enjoyed by people all over the world."

In its UK press release, Apple highlighted a few ‌App Store‌ success stories from U.K. developers in 2020. These include Digital Workroom, which develops productivity apps like Noted and aids businesses trying to create their own branded apps, the online language learning community Busuu, and Hutch Games – creator of free-to-play titles like the popular F1 Manager, Top Drives, and Rebel Racing.

Apple says that U.K. developers have benefitted from its ‌App Store‌ Small Business Program, which launched earlier this year and introduced a 15% reduced commission rates for developers who earned under $1 million in 2020. Apple takes 30 percent commission from developers making over one million dollars per year.

The Small Business Program has received praise from many developers, however some larger developers such as Spotify and Epic Games – both of which accuse Apple of anti-competitive behavior – have since criticized the program, saying it undermines the ‌‌App Store‌‌'s rules.

otternonsense
Pardon me while I go off on a tangent. This doughy wonky art style of flat badly drawn misshaped humanoids that you see from App Store hero images to Nike billboards to virtually every startup's brand promotion, needs to die off already.
Score: 18 Votes (Like | Disagree)

jeff127
Propaganda to try and justify not paying all their taxes?
Score: 17 Votes (Like | Disagree)

farewelwilliams
this is what 30% pays for. healthy developer resources to make successful apps.

LarxJo
Governments should then also remind than the taxes that Apple would pay without evading taxes would support tens of thousands of doctor, help to fight corona, increase public health, education.

Then should also point out that thanks to those taxes, Apple actually exists and can make a lot more money. What does Apple need that is paid by taxes? Engineers and competent employees in general, road and security. So Apple, do as you say to your developer: "Pay for a service without which you would be nothing".
Score: 7 Votes (Like | Disagree)

Crazy Badger
How much tax is Apple paying on their 30%?

30% might have been reasonable at the beginning, but I think Apple is pushing their luck now and need to rethink.
Score: 6 Votes (Like | Disagree)
Read All Comments