Apple last week sent out emails to developers who are in possession of a Developer Transition Kit, providing instructions on returning the test machines. Developers have now started mailing in their DTKs, with Apple rewarding the promised $500 USD credit once the DTK has been received. 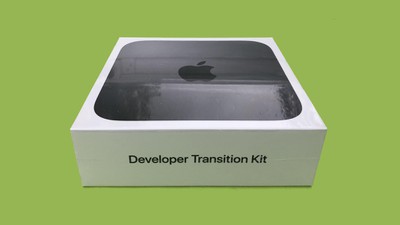 In appreciation of your participation in the Universal App Quick Start program and to help with your continued development of Universal apps, we'd like to provide you with a one-time-use promo code for $500 toward the purchase of a new M1 Mac or other Apple products ordered through the Apple Store Online.

Developers are receiving the equivalent of $500 USD regardless of country, so those in Canada are receiving C$ 636, while those in Europe will receive 412 euros. In some cases, the amount being paid out by Apple does not match the cost that developers paid to participate in the program as some countries were required to pay more than $500 USD.

The Developer Transition Kits were offered to developers ahead of the release of the M1 Macs to allow them to begin developing apps for Apple silicon chips. The DTKs are Mac minis with an A12Z chip, 16GB RAM, a 512GB SSD, two USB-C ports, two USB-A ports, and an HDMI 2.0 port. The A12Z chip in the DTK was first developed for the 2020 iPad Pro models.

Apple has asked developers to return their DTKs by March 31, 2021 in order to get the $500 credit, which can be used toward the purchase of any Apple product.

Apple originally planned to give developers a $200 credit, but later upped that amount to $500 after developers complained about low credit amounts and the technical issues that were experienced during the testing process.

While DTKs must now be sent back, developers will continue to have access to a private discussion forum and technical support from Apple for further app development.

Isn't this a given? Why is the $500 credit getting this much attention

Because Karen and her friends were upset about the lease they signed.
Score: 9 Votes (Like | Disagree)

zachz
Isn't this a given? Why is the $500 credit getting this much attention
Score: 8 Votes (Like | Disagree)

opiapr
In some cases, the amount being paid out by Apple does not match the cost that developers
paid to participate in the program as some countries were required to pay more than $500 USD

They weren't entitled to anything. They did not put down a refundable deposit they paid for access to the DTK without any refund. Apple offered them $200 and then raises it to $500 as a nice gesture. People should understand what contracts they enter into and abide by them. Stop whining afterwards.

I believe real developers understand this. But a lot of people got this DTK with the intention of getting freebie from Apple and those are the ones whining.
Score: 8 Votes (Like | Disagree)

Why is this news ?‍♂️

Seems drawn out to me tbh. It’s a contract and condition between Apple and the developer not sure why regular folks here need to be kept in the loop or every development that has no bearing on anything related to them.
Score: 5 Votes (Like | Disagree)

It was not part of the original contract they signed. With that, they paid $500, no credit, and had to return the device at end of the early access lease period.

Except the contact was for a year, Apple changed it and ended it early to me if Apple is going to take something then it should give something. In the original case it was $200 which was a lowball offer considering these things, developers made it public and Apple reconsidered and everyone (almost) is happy. Some developers have reported issues with the DTK with little to no support from Apple (cannot confirm).

There is another thing in many business’ called appreciation and sometimes that is a little token, the belated Steve Jobs understood this while Tim Cooks seems to have lost touch. Without developers a platform will faultier.

Rather than piss on the developers or Apple, understand a mutual understanding and agreement can be reached.
Score: 4 Votes (Like | Disagree)
Read All Comments

Friday February 26, 2021 3:57 pm PST by Juli Clover
Apple today sent out emails to developers who are in possession of a Developer Transition Kit, asking them to return the machines by March 31. The Developer Transition Kits are Mac minis with A12Z chips that Apple provided for development purposes ahead of the release of the M1 Macs. Apple in the emails provided developers with shipping instructions, and plans to begin collecting the DTKs...
Read Full Article • 174 comments

Wednesday February 3, 2021 4:48 pm PST by Juli Clover
Ahead of the release of the M1 Macs, Apple provided developers with a Developer Transition Kit that included a Mac mini equipped with an A12Z Bionic chip first used in the iPad Pro, 16GB RAM, a 512GB SSD, two USB-C ports, two USB-A ports, and an HDMI 2.0 port. Image via Axel Roest These DTKs were offered up on a temporary basis to developers who paid $500 for access, and were aimed at giving...
Read Full Article • 355 comments

Friday February 5, 2021 8:51 pm PST by Juli Clover
Prior to the release of the M1 Macs, Apple offered developers a $500 Developer Transition Kit (DTK) that included a Mac mini equipped with an A12Z Bionic chip first used in the iPad Pro, 16GB RAM, a 512GB SSD, two USB-C ports, two USB-A ports, and an HDMI 2.0 port. The DTKs were available on a temporary basis, and earlier this week, Apple said that it would soon begin asking developers to...
Read Full Article • 220 comments

Thursday March 18, 2021 10:05 am PDT by Juli Clover
Intel is continuing its anti-Apple ad campaign, today sharing a tweet that calls out the lack of ports on M1 Macs. In a photo, actor Justin Long sits on a couch with a Windows PC and holds up a handful of Apple dongles. Anyone know who these belong to? #GoPC pic.twitter.com/W6wCfMSEb8— Intel (@intel) March 18, 2021 Apple's Macs have long been derided for their lack of ports and the need to...
Read Full Article • 281 comments

Thursday March 4, 2021 8:00 am PST by Juli Clover
Satechi, known for its lineup of accessories designed for Apple's Macs, today announced the launch of the USB-C On-the-Go Multiport Adapter that's compatible with the Mac lineup and the iPad Air and iPad Pro. With the USB-C On-the-Go Multiport Adapter, Satechi aimed to fit in as many ports as possible into a package that's still portable. It includes a built-in USB-C PD charging port that...
Read Full Article • 39 comments