The U.S. Supreme Court will today hear arguments about whether the systems used by technology companies, including Apple and Google, to invalidate patents and see off litigation are unconstitutional (via Bloomberg). 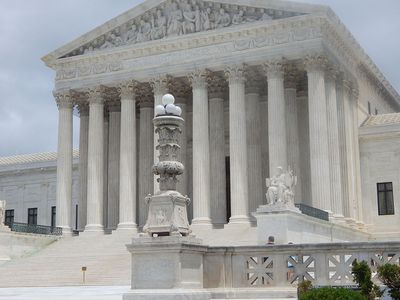 The Patent Trial and Appeal Board (PTAB), set up by Congress in 2011, has invalidated more than 2,000 patents. Apple is the single biggest user of the patent review board, having successfully attacked as many as 200 patents through it, and has said that it relies on "Congress's promise of a fair and efficient forum to challenge what often prove to be woefully weak patents that should not have issued in the first instance." Other users of the PTAB include Intel, Google, Microsoft, Oracle, and Samsung.

The PTAB has been dubbed a "death squad" due to its tendency to toss out patents, and some smaller inventors believe that the board has become an anticompetitive tool for large companies. It is alleged that the PTAB's judges may be serving in violation of the Constitution due to the amount of power they wield.

According to the U.S. Court of Appeals for the Federal Circuit, which handles most patent disputes, PTAB judges have important enough powers that they should be appointed directly by the president and confirmed by the Senate as "principal officers."

On the other hand, the Justice Department is urging the Supreme Court to leave the current system in place, saying that patent judges are "inferior officers" who do not need to be presidential appointees.

The Supreme Court could go as far as to bar the board from continuing to review and invalidate patents until changes to the appointment system are made, or shut down the PTAB entirely, forcing Congress to create a new board that more clearly caters to the needs of smaller inventors and patent owners. A ruling against the board could mean that hundreds of patent cases would have to be reconsidered, which could have considerable ramifications for companies that have used it successfully.

The PTAB survived a challenge at the Supreme Court in 2018, in a ruling which found that the panel was not unconstitutionally wielding powers that belong to the courts, but amid increasing scrutiny on the power of big tech companies and antitrust cases, there is a chance that things may pan out differently this time.

nt5672
Not sure which is better, but I do know that making the appointment political has its own set of problems.
Score: 9 Votes (Like | Disagree)

PinkyMacGodess
A board that seeks to eliminate the power of patent trolls is seeing their future clouded? Who couldn't see that happening.

It'd be like someone writing a bill to end hedge funds, the headwind would be worse than the 'wind' speed on Neptune ('https://www.weather.gov/fsd/neptune')! People from everywhere would be crawling out from under rocks not discovered yet to try to end that legislation. Or ending 'dark money' in politics. It used to be Social Security as the untouchable ;third rail' of politics, and now it's the money flow into politics. With the richest Congress in American history.
Score: 6 Votes (Like | Disagree)

MauiPa
would it be too much to ask to have Congress do its job and fix the mess that has become patents? Oh, when I say it out loud, it does sound absurd
Score: 4 Votes (Like | Disagree)

Obvious processes simply done on computer should not be used by trolls.

The patent shouldn’t stifle innovation (wait till Covid dust settles and the vaccine companies go after each other).

There needs to be a way to effectively penalize the people who try to abuse the system, whether that is trolling with lame patents or deep pockets trying to outspend small patent
Score: 3 Votes (Like | Disagree)

whooleytoo
So, is the Patent Trial and Appeal Board the "anti-Eastern District of Texas district court"?

You need a weak/overly vague patent enforced? Go to Texas.
You need a potentially valid patent overturned? Go to the PTAB.
Score: 2 Votes (Like | Disagree)
Read All Comments