The U.S. Department of Justice is investigating complaints from developers over Apple's "Sign in with Apple" option, reports The Information. 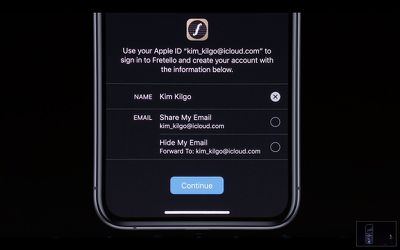 Introduced in iOS 13, ‌Sign in with Apple‌ is a privacy-focused login option that lets users opt to sign in to an app with their Apple ID, without the need to create a username or share an email address with developers.

Apple requires all App Store apps that offer Google, Facebook, and Twitter sign-in options to also provide a ‌Sign in with Apple‌ alternative (with exceptions for apps that exclusively use third-party accounts like Gmail and Tweetbot), which some developers are unhappy with.

Developers complaints filed last summer are now being investigated by U.S. antitrust regulators, according to sources that spoke to The Information. The U.S. DoJ is looking into how Apple uses its sign-in button and "other ‌App Store‌ rules that make it difficult for users to switch to a rival device maker."

The probe is examining Apple's control over the ‌App Store‌, the fees that it charges developers, and complaints on restrictions on location tracking and other forms of tracking that Apple's own apps are not subject to.

Apple spokesman Fred Sainz declined to comment on the antitrust investigation when queried by The Information, but said that the Sign in With Apple feature is designed to give customers a privacy-focused alternative to sign in options provided by other companies.

The Department of Justice has not yet decided whether to sue Apple, and that decision could take months. Facebook and Google are also facing antitrust investigations, and lawsuits have already been filed against them.

The committee released a 450 page report highlighting CEO interviews, over 1.3 million documents, and findings from hearings with app developers. The report recommended new antitrust laws after concluding that Apple had a monopoly over the distribution of software apps on iOS devices.

Apple is also facing antitrust investigations from in the European Union,Australia, Russia, Germany, and Italy, and has been fined by France and South Korea.

FaustsHausUK
They don't like it because I can finally hide my real email address and not get spammed to oblivion.
Score: 88 Votes (Like | Disagree)

poematik13
scumbag devs hate it when users can protect themselves from them lol
Score: 34 Votes (Like | Disagree)

Doomtomb
It is a bit of a lock-in to Apple's ecosystem using sign-in with Apple but I prefer that it's the only one that doesn't share my email address with everyone under the sun.
Score: 30 Votes (Like | Disagree)

I7guy
Wait, what? App store rules make it difficult to switch to another device makers. Does Windows make it easy to switch to Linux?
Score: 27 Votes (Like | Disagree)

I support this investigation - I think that requiring all devs to implement this is super anti-competitive and is a thorn in the side for many developers that have to support this in cases where it clearly messes up the flow of their registration process.

How so? simply giving the customer a choice is not anti-competitive in the least. developers cn include as many as they want, so can you explain why you say what you do?
Score: 18 Votes (Like | Disagree)
Read All Comments

PSA: Apple is Updating Old Apps With Latest Signing Certificate Ahead of iOS 14.5

Friday April 16, 2021 7:55 am PDT by Hartley Charlton
Users may notice that a number of very old apps are receiving new App Store updates. Instead of fixing bugs or adding new features, the updates are occurring because Apple is updating developers' apps that use a legacy App Store code signing certificate with the latest version so that they can launch correctly in the upcoming releases of iOS 14.5 and iPadOS 14.5. Developers of affected apps...
Read Full Article • 65 comments

Monday May 10, 2021 12:36 pm PDT by Juli Clover
Following the release of iOS 14.5.1 last week, Apple has stopped signing iOS 14.5, the previously available version of iOS 14 that was released in late April. With iOS 14.5 no longer being signed, it is not possible to downgrade to iOS 14.5 if you've already installed iOS 14.5.1. Apple routinely stops signing older versions of software updates after new releases come out in order to...
Read Full Article • 17 comments

Friday February 26, 2021 4:49 am PST by Tim Hardwick
The Netherlands Authority for Consumers and Markets, or ACM for short, is reportedly nearing a draft decision in its investigation into Apple over rules that require developers to use its in-app payment system, which charges commissions of between 15% and 30%. According to Reuters, the ACM revealed that the draft decision was nearing completion in letters sent this month to some of the...
Read Full Article • 140 comments