In what could be seen as an attempt to catch up to Apple's legacy software support for older iOS devices, Samsung is now promising Galaxy users that they'll receive security software updates for "at least four years" after a device's initial release. 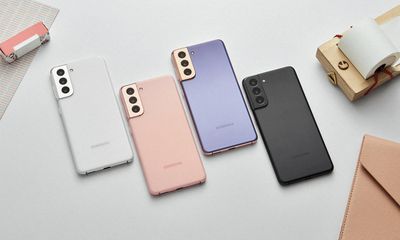 Samsung and Android have long had a reputation of being a fragmented ecosystem when it comes to OS updates. Samsung, unlike Apple, has multiple lines of smartphone devices, making it significantly harder to maintain all of them with frequent software updates.

Apple software releases typically support a range of older devices that have been superseded by newer models and are no longer sold by the company. For example, iOS 14 supports iPhone 6S models, which were released in 2015. On average, Apple tends to support devices with major iOS updates for at least five years after their launch.

It's important to note that Samsung's new commitment only targets security updates, not Android OS updates. Apple usually bundles security improvements and new features in a single update, however, it does occasionally release updates solely focused on security patches. In November of 2020, Apple released an update focused on patching major security issues for devices as old as the ‌iPhone‌ 5S, released in 2013.

Samsung's new four-year promise for security updates will only apply to devices launched after 2019. Any devices launched before then are still under Samsung's old policy. Samsung previously provided updates for its devices for at least two years after it initially launched, so the new announcement effectively doubles the timeframe.

As The Verge rightfully points out, Samsung says devices will receive "regular updates," which is the lowest tier of update frequency. The tier is typically only reserved for devices that Samsung no longer supports, but still receives updates, without a fixed time schedule. In contrast, Google only promises "at least three years" of security updates for its Pixel phones.

Last year, Samsung did promise to provide some of its devices with "three generations" of Android updates after their initial launch, but only for its S, N, and Z series. The A series, its low-end family of Galaxy devices, will receive software updates "until hardware allows," according to a statement provided to The Verge.

Whathappened
They do it as late as possible and only for security updates. Ridiculous.
Score: 19 Votes (Like | Disagree)

iBluetooth
Samsung overpromises and under delivers.
Score: 14 Votes (Like | Disagree)

Souponastick270
Lol meanwhile my 7 Plus is 5 years old this year and will most likely be getting iOS 15 taking it up to 6 years old... the fact that this is ‘news’ is laughable
Score: 14 Votes (Like | Disagree)

Well - lets be honest - cheap prices and premium updates is not compatible. You shame samsung here - but cheer Apple because they do and overcharge you - that’s a bit strange!

Apple isn’t overcharging me. The $829 I paid for an iPhone 12 that technically could last me at least until 2027 if not longer vs buying whatever galaxy was relevant in 2018 at the same price or higher and it’s already eol in 2021

I’ll take being “overcharged” for the sake not using a crap Os from an oem who can’t even properly support the devices it releases
Score: 12 Votes (Like | Disagree)
Read All Comments