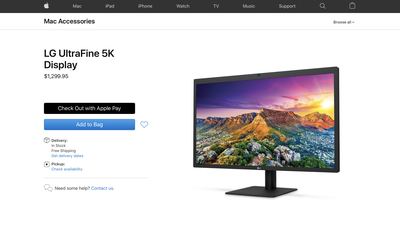 Interestingly, both the 4K and 5K UltraFine displays remain listed and available for order in the United States. The 5K UltraFine display retails for $1,300 and offers one Thunderbolt 3 port and three USB-C ports. The display features up to 500 nits of brightness with a 5,120 x 2,880 resolution and P3 wide color gamut, and offers built-in stereo speakers, a camera, and a microphone.

Update: According to MacGeneration, a soon-to-be-implemented regulation across the European Union and the UK is the cause of the display's disappearance from Apple's online store in those regions.

kyjaotkb
This is completely ridiculous, if you use a Mac, there isn't a single retina-quality monitor (4K at 24" or less or 5K at 27" or less) available to buy in Europe, apart from Apple's 6K XDR Display, which very few can afford. Why can't we have the iMac panels as standalone displays, and/or the return of target display mode?
Score: 26 Votes (Like | Disagree)

Rob__Mac
I've never understood the hatred of the UltraFine. I know they're not Apple branded, but given the alternatives on the market I've always been very happy. In terms of features, I couldn't find a decent alternative when I was buying… I essentially wanted a 27" iMac screen for my other computers - and that's exactly what it is!
Score: 19 Votes (Like | Disagree)

Propine
Assumption about Apple removing those displays from the Store might actually be wrong. I think they removed it, because LG has now started selling them on their own website.

Until now they were not available on the lg.com website in Germany (you couldn't actually buy any monitors on their website just a half a year ago), whereas now I can order both the Ultrafine 4k and 5k just right there (see screenshot) with same price that Apple sold them on.

I assume there are was a fixed term contract on exclusive sale through Apple distribution channels which has now ended.

chucker23n1
Aaaaaand there continues to be absolutely no viable option to have an external macOS display with Retina. Which, since non-Retina text rendering has gotten considerably worse since High Sierra, is quite a problem.

Seems like using a Mac (other the iMac) in an office environment is no longer a setting Apple wants to support.

Jaro65
So hoping the replacement is on its way finally. Hopefully, it will be Apple-branded and with at least a 32" screen. I would be ok with it costing up to $1500, maybe even $2k depending on specs and features.
Score: 9 Votes (Like | Disagree)
Read All Comments

Thursday March 24, 2022 3:43 am PDT by Sami Fathi
Following the latest macOS Monterey 12.3 update, users are reporting several problems when using external monitors, ranging from Macs not detecting displays at all to inaccurate screen output, according to posts on the Apple Support and MacRumors forums. In the ten days since the update became available to the public, users have already reported issues with the update bricking Macs that...
Read Full Article • 203 comments