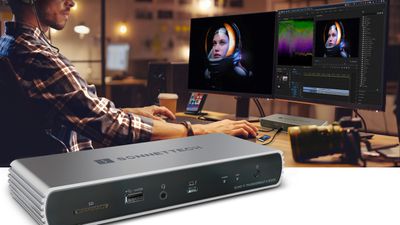 Given that Thunderbolt 4 shares the same connector design as USB-C, the dock can also be used with 2018 and newer iPad Pro models, as well as the fourth-generation iPad Air. It can also connect to USB-C external displays.

Sonnet says the dock will be available in early April in the United States, priced at $249.99, with international availability to follow in May. For a limited time, customers in the United States and Canada may sign up on Sonnet's website to receive a promotion code that will allow them to purchase the dock for $199.99 when it is available.

OWC and CalDigit also introduced Thunderbolt 4 docks recently, priced at $249 and $179.99, respectively, so it's worth checking out all three options. Those two brands also announced availability of Thunderbolt 4 cables today.

Only 1 monitor with M1 Macs.

Good point! It is a serious issue which is surprising considering they pushed the M1 up into the pro line.
Score: 5 Votes (Like | Disagree)

giggles
I like this new wave of Thunderbolt 4 docks being all the rage but since it’s 2021 why none of them sports a 2.5Gbps ethernet port? (I understand a 10Gbe would be a bit taxing thermal-wise, but at least give us 2.5G...gigabit is so last decade..)
Score: 4 Votes (Like | Disagree)

LeeTom
So the computer attaches from the FRONT? Seems kind of odd... the upstream TB4 port should be in the back...
Score: 4 Votes (Like | Disagree)

I like this new wave of Thunderbolt 4 docks being all the rage but since it’s 2021 why none of them sports a 2.5Gbps ethernet port? (I understand a 10Gbe would be a bit taxing thermal-wise, but at least give us 2.5G...gigabit is so last decade..)

I wonder how big a market there is for >1 Gb ethernet? In my experience, MacRumors is an echo chamber of super-techie people, while the general Mac community isn't as techie.
Score: 4 Votes (Like | Disagree)

This Sonnet dock bears an uncanny resemblance to the OWC dock as far as the layout anyway.


Which one will be better? ?

Probably performs exactly the same. They gotta be using the same board from an OEM. This happen sometimes, even among bigger peripheral makers like them. The CalDigit TB3 bus powered hub that even Apple Stores have it, is literally the same one that OWC makes, just with the logo printed differently.

Yes, but they conform to most of the TB4 specs except the ability to drive a second external display.
Score: 4 Votes (Like | Disagree)
Read All Comments

Friday May 28, 2021 10:58 am PDT by Juli Clover
For this week's giveaway, we've teamed up with MAXOAK to offer MacRumors readers a chance to win a Bluetti AC200P 2000Wh Portable Power Station, a Bluetti AC50S 500Wh Portable Power Station, or a Bluetti AC30 300Wh Backup Battery, all of which are fantastic to have on hand for camping, RV use, off-grid living, power outages, emergencies, and more. Priced at $1,599 after a $100 discount from...
Read Full Article • 58 comments

Wednesday May 5, 2021 1:14 pm PDT by Juli Clover
Astropad's Luna Display accessory that's able to turn an old iPad or Mac into a secondary display for a primary Mac was today updated with a new feature that's designed to allow Mac-to-Mac mode to work over Ethernet and Thunderbolt. The Luna Display is an alternative to Apple's Sidecar, allowing an iPad to be used as a display for a Mac. Unlike Sidecar, it works with other Macs, so you can...
Read Full Article • 57 comments

Monday March 29, 2021 6:20 am PDT by Hartley Charlton
Apple prototyped models of the first-generation iPad with two ports for expanded docking options, according to images of a prototype unit. Shared on Twitter by Apple device collector Giulio Zompetti, the images reinforce previous reports that Apple was planning to offer two 30-pin connector ports on the original iPad, with one on the base below the Home Button, and one on the left-hand...
Read Full Article • 40 comments

Wednesday January 26, 2022 8:56 am PST by Joe Rossignol
Benchmark results have started to surface for MSI's new GE76 Raider, one of the first laptops to be powered by Intel's new 12th-generation Core i9 processor. Intel previously said that its new high-end Core i9 processor is faster than Apple's M1 Max chip in the 16-inch MacBook Pro and, as noted by Macworld, early Geekbench 5 results do appear to confirm this claim, but there are several...
Read Full Article • 232 comments