Doppler is getting a significant update next week, bringing some notable track and album features to the increasingly popular third-party music playing app for iPhone. 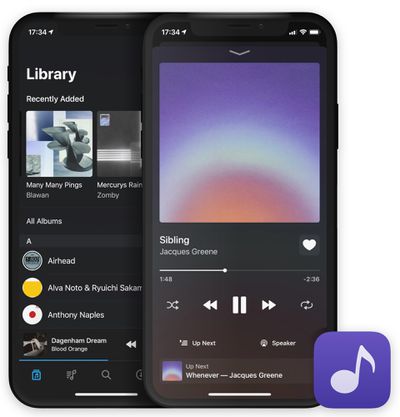 For those unfamiliar, the Doppler app offers users an alternative way to experience their music library, sporting an adaptive minimalist interface with an emphasis on album artwork/metadata editing on ‌iPhone‌ and support for importing MP3, FLAC, AAC, and WAV file formats without having to connect to a computer.

In December, Doppler Listening reports were added, offering users an elegant overview of their listening habits over the course of the year.

And in the latest v2.3 update due to roll out on February 23, Doppler users will be able to ask Siri to play specific albums, songs and playlists within Doppler. ‌Siri‌ commands like "Play all songs by James Blake in Doppler" or "Play my Liked Songs playlist in Doppler" are now supported in English, French, German, and Spanish.

Users will still need to include "in Doppler" at the end of commands so Siri knows which app to use, but the developer says this should change in iOS 14.5.

Doppler will also support ‌Siri‌ Suggestions from next week. As Doppler is used, ‌Siri‌ can learn patterns around how and when music is listened to. For example, when headphones are connected, ‌Siri‌ can intelligently suggest music to play.

In addition, Doppler 2.3 will integrate with Spotlight search. Songs and playlists show in search results on the Home Screen. Results can be tapped to open in Doppler, or to start playing without having to open the app.

The third and final integration is Doppler for CarPlay — a custom ‌CarPlay‌ app to access and play content from the Doppler library. The ‌CarPlay‌ interface offers library-wide playback and shuffle buttons, as well as Recently Added albums and usual artists, albums and playlists. ‌Siri‌ support is also included, so Doppler can be controlled in ‌CarPlay‌ with voice alone.

travelsheep
Still waiting for an iOS music player with a clean interface that can do skip forward/backwards 10s and change playback speed. Not looking for an ad-bomb LSD-fueled interface with free malware and in-app purchases.
Score: 5 Votes (Like | Disagree)

Mick-Mac
I'd be happy to give this a try provided it can successfully use my Music library. I just hate Apple's Music app so very much... Apple's Mac app is also awful...
Score: 2 Votes (Like | Disagree)

I’m not so sure about that. On the U.K. store it currently has eight reviews. Eight. If your definition of ‘increasingly popular’ is doubling users from 4 to 8, then I suppose so. But mine is a bit more circumspect.

Can anybody tell me if this app updates Music play counts (I leverage this with Smart playlists) and does it support Sound Check?

The app seems pretty buggy to me. On two iOS devices it really struggles to import my songs from my Music library, with repeated hangs.
Score: 1 Votes (Like | Disagree)
Read All Comments

Wednesday January 5, 2022 6:07 am PST by Joe Rossignol
For those interested in adding wireless CarPlay to their vehicle on an aftermarket basis, Alpine today introduced its next-generation Halo receiver with an 11-inch capacitive touchscreen that hovers over the dashboard. Despite having such a large screen, the receiver has a single-DIN chassis, allowing it to be installed in a wide range of vehicles. Alpine's previous Halo receiver was limited ...
Read Full Article • 126 comments