Google News Showcase Launches in Argentina and the UK

Google today announced that "Google News Showcase," a new style of displaying the news within the Google and Google News mobile apps and website, has launched in the UK and Argentina, following an Australian rollout last week. 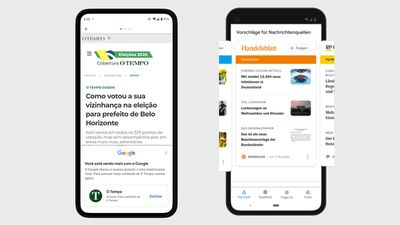 Google says News Showcase offers participating publishers the chance to provide more context for stories such as through bullet points and timelines, and it has plans for supporting audio, video, and "daily briefings" in the future, directly within the Google and Google News apps on iOS and Android.

In Argentina, Google says it has partnered with 40 publishers including Clarin, La Nación, Perfil, Crónica, Cronista, El Economista, Diario Río Negro, El Día, La Gaceta, and El Litoral. In the UK, Google has inked deals with The Financial Times, The Telegraph, Reuters, and more than 120 other publishers to offer this new panel experience to users.

Google announced News Showcase in October of last year with a commitment to invest $1 billion in partnerships with publishers and "the future of news." Google describes News Showcase as a way for users to get more insight into stories and "helps publishers develop deeper relationships with their audiences."

As part of the partnership and investment with publishers, Google says users will be able to view "select" paywall content, but doesn't specify what it means by "select." In general, the overall approach from Google bears some resemblances to Apple's own Apple News+ service.

Apple, like Google, has signed partnerships with some of the world's largest publishers to offer subscribers otherwise-paywalled articles within the ‌Apple News‌ app. Unlike ‌Apple News‌+ however, Google is not offering users all of a publisher's paywalled content, and while News Showcase remains free, ‌Apple News‌+ comes with a $9.99 monthly price tag.

Google says that its approach to news curation is different than others because it "leans on the editorial choices individual publishers make about which stories to show readers and how to present them." Apple has faced criticism for its approach to ‌Apple News‌+ largely from The New York Times, which pulled out of the service entirely last year, because Apple's service does not "align with its strategy of building direct relationships with paying readers."

joshwenke
The best way to get news? Old fashioned bookmarks of sites you enjoy reading. After the insane amount of garbage that showed up in my news feed on every platform like this, I decided to just visit the sites I enjoyed and wanted to support individually.
Score: 3 Votes (Like | Disagree)

GrumpyMom
It will be interesting to see how long this one lasts before it joins the Google Graveyard. You never know with Google.
Score: 2 Votes (Like | Disagree)

CausticSoda
Special celebratory feature: A look back at the Falklands Conflict.
Score: 2 Votes (Like | Disagree)

applicious84
Google used to have a fantastic RSS feed. I used Feedly for a while instead, but creating a Twitter list of the news you respect can be really effective as well, especially since RSS feeds are no longer a priority
Score: 1 Votes (Like | Disagree)

Google announced ('https://blog.google/outreach-initiatives/google-news-initiative/google-news-showcase/') News Showcase in October of last year with a commitment to invest $1 billion in partnerships with publishers and "the future of news."

In other words, Google paid a paltry sum of $1 billion to have even more control over people’s perception of reality. I expect better bargaining from a news agency....

“Such a waste of talent. He chose money over power. In this town, a mistake nearly everyone makes. Money is the Mc-mansion in Sarasota that starts falling apart after 10 years. Power is the old stone building that stands for centuries. I cannot respect someone who doesn’t see the difference.”

Monday December 14, 2020 4:10 am PST by Tim Hardwick
Gmail, YouTube and Google Docs are all experiencing severe outages, with reports of problems accessing the services across much of Europe, the U.S., and India. Google News, Google Translate, Google Ads, Google Domain, Google Cloud Platform Dashboard, and Google My Business are also down. Other services that use Google to log in are similarly affected. It's not clear right now what's...
Read Full Article • 70 comments

Google Photos Will Use Machine Learning to Animate Your Still Shots

Wednesday May 19, 2021 1:00 am PDT by Tim Hardwick
Google Photos is getting a new AI-driven feature that can take two similar pictures in your iPhone's camera roll and turn them into a single moving shot, reports The Verge. Google says the feature achieves this by using machine learning to generate additional frames between the two images, which creates the appearance of movement. If you've taken several shots in succession, for example,...
Read Full Article • 88 comments