February is American Heart Month, and Apple marked the occasion today with a Newsroom feature highlighting how the Apple Watch potentially saved the life of 59-year-old Bob March. In short, the Apple Watch alerted March to irregular heart rate readings that ultimately led to doctors discovering that he had arrhythmia. 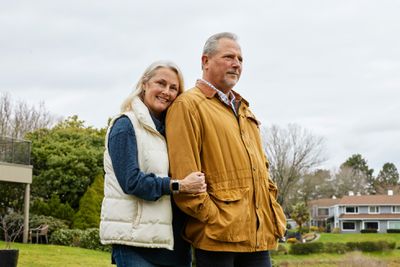 Bob and Lori March
Bob was gifted the Apple Watch by his wife Lori for their anniversary. "We truly believe that it saved his life," she said. "It doesn't get any bigger than that."

Bob, a former college-level athlete who also ran half marathons as an adult, immediately started exploring his new Apple Watch. He discovered the Heart Rate app and though he was relaxed, his first reading showed 127 beats per minute. That was high for Bob, but he brushed it off as a fluke.

"I thought, 'this is nuts,'" Bob says. "If I was easing into a run, or cooling down, I'd definitely be hitting numbers like that."

Later that day, Bob and Lori noticed more erratic heart rate readings. "I started running and it started going down but then it would come back up. So that's when I realized something may not be right here."

The couple saw similar patterns over the next few days, prompting Lori to schedule an appointment for a routine physical.

"I figured the doctor would tell me to practice breathing, try yoga, cut back on sodium or something of that sort," says Bob. "Instead, 10 minutes after meeting with me, he had me in an ambulance headed to the ER."

Doctors found an arrhythmia, which caused Bob's heart to work in overdrive. They said it was like he had been running a constant marathon for the past few weeks and if left unchecked, the results could have been devastating.

March ultimately underwent successful heart surgery, and after a few months, he is now thankful to be back to running alongside his dog. It's yet another example of how the Apple Watch's health features potentially saved a life.

melgross
I don’t know how these particular people get picked, or even known. Over two years ago, my watch alerted me to a problem. I ended up in the hospital, and I was told that if it weren’t for the warning my watch gave me, I could have had a heart attack around two days later.

i also had a catheter, and a couple of days after I got home, with that, my watch again alerted me. I had developed sepsis, so back in the hospital for another week. My specialist said that one more day, and I might not have survived.

i didn’t send a note to Apple about this, and I don’t know how people get selected. But I can pretty much say without question, that far more people are saved by their watches than we ever hear about.

the only thing I’m skeptical about is the fall detection. I had to turn mine off in my Series 5, and now in the 6. I can be standing or sitting, doing nothing involving much movement, and it will come on, so I have to tap that I didn’t fall, so it doesn’t ring emergency services. I don’t understand what the problem is, because when it first came out, people tested it, in the gym and elsewhere, and didn’t trigger it.
Score: 23 Votes (Like | Disagree)

chodges
This is awesome. Glad Bob’s okay now and if there was ever a reason for wearing a smart watch......
Score: 17 Votes (Like | Disagree)

jwh49
The Apple Watch is exactly what alerted me to my high heart rate while sleeping leading to my diagnosis of A-Fib over a year ago. When I told another doctor about this just a month ago, he said that I was the 2nd person THAT WEEK who told him that.
Score: 17 Votes (Like | Disagree)

Taz Mangus
With all the death that is happening now as a result of COVID, really nice to see a story like this one where technology is saving lives.
Score: 16 Votes (Like | Disagree)

McKodiak
I've been doing the Apple Fitness+ rowing workouts everyday since the beginning of December. For the most part, I was fairly sedentary. I was tracking my max heart rate using the Apple Watch. After a recent night's sleep, I was shocked that I had an alert that my heart rate dipped below 40bpm, to 39bpm for 10 minutes. I was a bit concerned but basically found out my heart was getting stronger from all the rowing which has me having a lower resting and sleeping heart rate.
Score: 12 Votes (Like | Disagree)
Read All Comments

Sunday February 5, 2023 6:07 am PST by Joe Rossignol
Apple has discussed selling a new top-of-the-line iPhone alongside the Pro and Pro Max models in 2024 at the earliest, according to Bloomberg's Mark Gurman. Based on this timeframe, the device would be part of the iPhone 16 lineup or later. In a September 2022 edition of his weekly "Power On" newsletter, Gurman said there was "potential" for an iPhone 15 Ultra to replace the iPhone 15 Pro...
Read Full Article • 385 comments