Back in 2016 when the Apple Watch was still a relatively new device, Swiss watch maker H. Moser & Cie came out with a high-end mechanical Apple Watch clone called the Swiss Alp Watch, featuring a rectangular watch face with curved, round edges, a crown at the side, and Apple Watch style lugs. 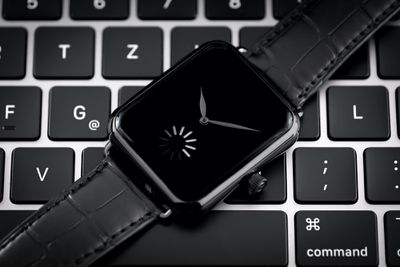 Featuring the same rectangular design as the Apple Watch and the original Swiss Alp Watch, the Final Upgrade was created after an H. Moser & Cie customer suggested the design. The DLC steel case features a Vantablack dial, and for those unfamiliar with Vantablack, it is considered one of the darkest known substances, absorbing up to 99.965 percent of visible light.

Instead of a traditional seconds hand, the Final Upgrade features an Apple Watch-style loading symbol, which is of course poking fun at the Apple Watch. H. Moser plays on the theme of simplicity and "less is more" in its marketing materials.

"No updates required, no lousy autonomy, no unnecessary features, no annoying notifications, just the only reminder you ever really need: To disconnect from all the noise and cherish each and every moment," reads a description of the watch.

The loading wheel, or "shaded disc made of of openings" is meant to "serve as a reminder that the here and now is all that matters."

myrtlebee
Who would want something that looks like the anxiety-inducing spinning wheel / beach ball from iOS / MacOS on their watch constantly?
Score: 52 Votes (Like | Disagree)

benshive
For when you have far more money than sense or taste I guess lol
Score: 27 Votes (Like | Disagree)

richard371
I always find mechanical watches far more interesting but not interested int this one lol.
Score: 19 Votes (Like | Disagree)

Meh not a clone. I had a mechanical Tissot watch in the 80s with the Apple Watch shape. I think it was called Tissot Twotimer Sport Edition.

Sunday February 5, 2023 6:06 am PST by Hartley Charlton
A new version of the Mac Studio with the "M2 Ultra" chip is unlikely to arrive in the near future, according to Bloomberg's Mark Gurman. In the latest edition of his "Power On" newsletter, Gurman explained that since the upcoming Apple silicon Mac Pro is "very similar in functionality to the Mac Studio," Apple may wait until the release of M3- or M4-series chips to update the machine, or...
Read Full Article • 530 comments