Tesla's Next Car Could Support Ultra Wideband Unlocking With iPhone

A leaked Tesla FCC document shared by The Verge suggests that Tesla's next cars will support Ultra Wideband, a technology that's built into the latest iPhones and in vehicles, allows for greater accuracy when unlocking a car with a smartphone. 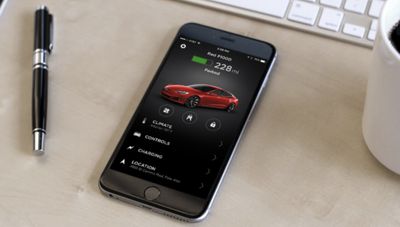 Tesla in September submitted documentation on new key fobs, a controller, and endpoints that would be installed inside the frame and cabin of a vehicle, some of which support Ultra Wideband communication. Tesla is using a standards-based implementation of Ultra Wideband, so it should be compatible with the iPhone 11 and iPhone 12 models that support the technology if it ultimately ends up in Tesla vehicles.

Apple's ‌iPhone‌ 11 and ‌iPhone 12‌ devices are equipped with a U1 chip that supports Ultra Wideband technology for improved spatial awareness and indoor location detection. Apple has likened Ultra Wideband to "GPS at the scale of the living room," and it is designed for accurate close proximity tracking.

Right now, Apple is using the U1 chip for a directional AirDrop feature and to interact with the U1-equipped HomePod mini for handing off songs, but it otherwise doesn't do much. In the future, Apple is expected to use the U1 chip for AirTags, and it also has applications like integration with vehicles.

There's no explicit word that Tesla's Ultra Wideband implementation will work with the ‌iPhone‌, but Tesla already has an iPhone app that allows Tesla owners to lock and unlock their cars, among other features. According to the FCC document, Tesla's Ultra Wideband feature will more accurately determine how far a person is from their car for unlocking and activation purposes, and Tesla describes it as more secure.

Future Tesla vehicles will include several Ultra Wideband endpoints in the vehicle for proper location triangulation and to determine whether a person is inside or outside of the car, and these will likely be able to interface with Apple's iPhones.

Other vehicle manufacturers are also working on Ultra Wideband technology that will work with the ‌iPhone‌ 11 and ‌iPhone 12‌ models. In January, BMW said that it is working on Digital Key Plus, a new Ultra Wideband version of the Apple Car Keys feature that is designed to allow drivers to unlock and start their vehicles without removing their ‌iPhone‌ from their pocket or bag.

BMW's Ultra Wideband technology will be built into the iX electric vehicle set to launch in Europe in late 2021 and in North America in early 2022.

for now though, hope they bring carkey support to my current model 3.

I just want Apple CarKey in the new Teslas.

Just curious, why would you want the current CarKey implementation? Right now you can just walk up to the car with your phone in your pocket or bag and just get in and drive. Why would you want to have to take out your phone, tap the door, then get in the car and tap your phone on the console to drive away. That seems like a step backwards in tech.
Score: 8 Votes (Like | Disagree)

Just curious, why would you want the current CarKey implementation? Right now you can just walk up to the car with your phone in your pocket or bag and just get in and drive. Why would you want to have to take out your phone, tap the door, then get in the car and tap your phone on the console to drive away. That seems like a step backwards in tech.

It doesn't work all the time.

One time I parked on the street for a quick coffee run. I ran back to my car and my doors wouldn't unlock. I had to pull out my phone, unlock my phone (typing in my pin because Face ID won't recognize with my mask on), find Tesla, launch the app, and press unlock.
With CarKey, I can just wave my Apple Watch at the door and it'll unlock.

Third scenario: my gym bag was once stolen which had my phone and wallet. Can't unlock my car without my phone or backup car key. However, I had my Apple Watch still. I could have unlocked with CarKey.
Score: 5 Votes (Like | Disagree)

Let’s hope they fix the frozen door handles or this won’t matter.

not specific to Tesla anyways.
Score: 4 Votes (Like | Disagree)

Do they even support CarPlay yet? Baby steps....

They probably won't. Plus, the Tesla infotainment system is really good, I don't see that many advantages that CarPlay would have.
Score: 4 Votes (Like | Disagree)

ignatius345
I was driving on a section of highway 1 in Northern California one time and came across a guy in a Tesla who was totally locked out. He'd gotten out of the car without his key or fob or whatever and it had automatically locked at some point, he said. The spot had really spotty cell service and while he could make a call (barely) the car couldn't get enough of a signal to be unlocked remotely. I guess anyone could lock themselves out of any car, but it really seemed like the car had outsmarted him.
Score: 3 Votes (Like | Disagree)
Read All Comments