Nearly three months after Apple publicly released macOS Big Sur, a growing number of users have expressed frustration that the Box Drive app is still experiencing issues on the latest version of the operating system. Many users rely on Box as a cloud storage provider, similar to iCloud, Dropbox, Microsoft OneDrive, and Google Drive. 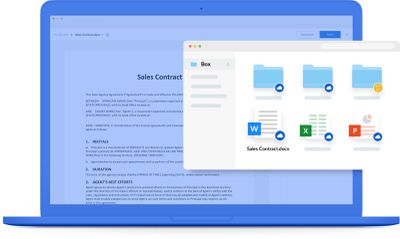 On both Intel-based and M1-based Macs, users have reported receiving the following error message after attempting to open the Box Drive app: "Box Drive's system extension failed to load. Please make sure it has been enabled in System Preferences > Security & Privacy and then restart your computer."

While enabling the app's system extension and rebooting as advised should resolve the issue for most Intel-based Mac users, this is not always the case, and the solution does not work at all on Apple's new M1-based Macs. As a result, M1 Mac users have been forced to use the web or mobile versions of Box while waiting on a compatibility update.

A few months ago, Box said that it planned to release a beta version of the app with M1 support in early 2021 for enterprise customers. However, the company has not provided a more specific timeframe since then, leading some users to grow impatient and consider migrating their individual or corporate accounts to rival services.

"We're going to start looking for alternative products that do the same and work on M1 machines," wrote one user in the Box support forums.

In a statement shared with MacRumors today, Box reiterated that it is "actively updating" the Box Drive app to be fully compatible with macOS Big Sur and M1 Macs, but the company did not provide an update on timing.

"We're actively updating our Box Drive desktop application to be compatible with the new M1 Macs and Big Sur," said Box. "We'll share more information on this release, including timing, as soon as possible. In the interim, all users can continue to securely access Box through the web and on the Box mobile apps."

macOS Big Sur beta testing began in June 2020, and the operating system was released in November, the same month that M1 Macs launched.

OneDrive is a hot mess on all MacOS releases. I have never been able to use it reliably.

It seems to work OK for me. A bit slow and with occasional CPU spikes.
Score: 3 Votes (Like | Disagree)

nsayer
I have zero patience with developers who don't have their apps updated in time for new releases of Apple's OSes given that there are months and months of developers' preview versions. That's the entire purpose Apple releases them.

The worst offender I've found so far is ASIX. Their AX88179 driver (for a popular USB Ethernet chip) is still a beta and requires you to disable SIP to install it. It's now February. ?‍♂️
Score: 2 Votes (Like | Disagree)

As they say, Jobs said " You are a feature not a product..."

I dont get why you want to use Drop Box or Box. All big tech has it and probably integrated better. Whats their sales pitch?

It's all about integrations.

If you already have Office 365, it's natural to use OneDrive, since it's included with the subscription. Same goes if you already use SharePoint; OneDrive and SharePoint share a backend now (so you can enhance the filesystem with more metadata).

If you already have Apple devices, iCloud Drive is the easiest to get into.

If you already have a lot of friends with Dropbox, you'll probably get Dropbox.

Box has its niche in the enterprise segment, so it mainly competes with OneDrive. It's like Slack vs. Teams.
Score: 2 Votes (Like | Disagree)

kanki1985
Imagine your car breaks down and the service company, after 3 months of 'unable to resolve' says, "we are working to fix your car, in the meanwhile, try uber and lyft as alternatives for your daily rides".
Score: 2 Votes (Like | Disagree)

reyesmac
I wonder how long it’s going to take for Apple to have a development platform that one can create an app and have it last for an extremely long time. Even some iOS apps become incompatible eventually. It would be better for developers if they didn’t have to rewrite their apps over time. With Apple silicon they have a chance to do that or to have it become worse due to forced obsolescence every third or fourth OS upgrade. It stinks giving up tools you liked every few years when Windows is able to keep them going.
Score: 2 Votes (Like | Disagree)

You clearly didn’t read what I said. If you rely on your computer or specific software to run your business or school or whatever and you blindly purchase a new computer or software without checking for incompatibilities, you are an idiot that deserves to have issues.

I did read what you said and businesses add employees and need new computers. I would never order an Intel machine now, that technology is dead. Box and Google screwed the pooch on this and I hope it costs them clients.
Score: 2 Votes (Like | Disagree)
Read All Comments

Tuesday April 20, 2021 11:16 am PDT by Juli Clover
Apple today seeded the RC version of an upcoming macOS Big Sur 11.3 update to developers for testing purposes, with the new beta coming one week after the launch of the eighth beta and more than two months after the release of macOS Big Sur 11.2, a bug fix update. Developers can download the ‌‌macOS Big Sur‌‌ 11.3 beta using the Software Update mechanism in System Preferences after...
Read Full Article • 58 comments

Monday June 14, 2021 10:04 am PDT by Juli Clover
Apple today seeded the third beta of an upcoming macOS Big Sur 11.5 update to developers for testing purposes, with the new beta coming two weeks after the release of the second macOS Big Sur 11.5 beta. Developers can download the ‌‌‌‌macOS Big Sur‌‌‌‌ 11.5 beta using the Software Update mechanism in System Preferences after installing the proper profile from the Apple...
Read Full Article • 26 comments