Spotify has started releasing audiobook recordings on its streaming platform, indicating the company's intention to further broaden its library of non-music content (via The Hollywood Reporter). 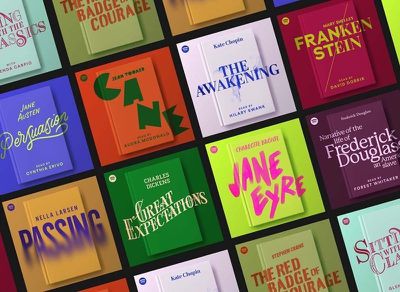 The collection of nine audiobooks are in the public domain, but are original recordings that are exclusive to Spotify. The titles include Mary Shelley's Frankenstein, narrated by David Dobrik, Narrative of the Life of Frederick Douglass, an American Slave, read by Forest Whitaker, and Kate Chopin's The Awakening, read by Hilary Swank, amongst other classics. From the report:

To accompany the audiobooks, Spotify has commissioned series Sitting with the Classics on Spotify, in which Harvard professor Glenda Carpio offers a deep-dive on each book, exploring the history and breaking down the narratives and themes for a modern audience.

The classic audiobooks will be available for free globally but promoted only to English-speaking markets including the United States, the United Kingdom, Canada, Australia and Germany.

Spotify says the collection is a test to see if the audiobooks gain traction on its streaming service, but if it takes off like podcasts have done on the platform, the company's dive into audiobooks could see it take on rivals like Amazon's Audible and Apple Books in a market that was valued at nearly $2.7 billion in 2019, according to a report from Grand View Research.

Over the past few years Spotify has spent $800 million buying podcasting companies like Gimlet Media and The Ringer, as well as acquiring the rights to popular podcasts like The Joe Rogan Experience. According to today's report, Spotify now has 1.9 million podcasts on its platform and says 22 percent of its 320 million monthly active users engaged with that content during the third quarter of 2020.

For a while now I’ve wondered why books—not just audiobooks, but any books—aren’t ever given a subscription service. Amazon sort of took a stab at it, but they only included titles which were published through them, and those aren’t the books most people wanted to read.

There is a subscription service for books, its your local library.
Score: 5 Votes (Like | Disagree)

bpp85
I’m not a fan of audiobooks and I don’t like Spotify adding “non music” in their music app. I would prefer it if they created separate apps. However I heard people like having podcasts and music in the same app so ??‍♂️
Score: 4 Votes (Like | Disagree)

There is a subscription service for books, its your local library.

A bit of Googling has shown me that plenty of public libraries actually have systems in place for borrowing ebooks, and they don’t seem to be particularly complicated either. I’m impressed and surprised that I missed that, since I do visit my local library pretty often. Good tip!
Score: 2 Votes (Like | Disagree)

For a while now I’ve wondered why books—not just audiobooks, but any books—aren’t ever given a subscription service. Amazon sort of took a stab at it, but they only included titles which were published through them, and those aren’t the books most people wanted to read. Even to purchase outright, Audible (for audiobooks) and Kindle and Kobo (for ebooks) are the only good options I’ve heard of.

I wonder how often Spotify subscribers will use this. If it gets popular, maybe some other players will want to take on books, too.

For books, I think it's about how the consumption pattern differs to music and movies. It can take weeks to consume a single book that you buy. So then you wonder if you really need to pay for a subscription at all.

Also the market size. Unfortunately people who read books are far fewer than people who watch movies and listen to music. Audio books even more so.

Technically Audio books is a subscription service, but they have a credit system give only one book a month. Which sort of works for me at least. There are sales where you get two books per credit - or you can buy credits and such. Works out reasonably over the course of an year.
Score: 2 Votes (Like | Disagree)

English-speaking markets including the United States, the United Kingdom, Canada, Australia and Germany

I’m not a fan of audiobooks and I don’t like Spotify adding “non music” in their music app. I would prefer it if they created separate apps. However I heard people like having podcasts and music in the same app so ??‍♂️

100% this. I have asked Spotify multiple times for a switch to turn off Podcasts recommendations. I've also asked if they could move Podcasts to a separate tab. That would probably be the best solution. Three tabs: Music, Books, Podcasts. If I could get one more design in it would be the ability to hide tabs. No way they will ever let you decide what is not recommended tho. I'm betting Podcasts and books will have much higher margins so they want to push you into those.
Score: 2 Votes (Like | Disagree)
Read All Comments