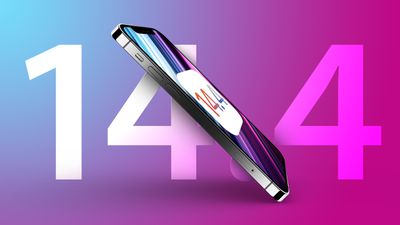 The iOS and iPadOS 14.4 updates can be downloaded for free and the software is available on all eligible devices over-the-air in the Settings app. To access the new software, go to Settings > General > Software Update.

iOS 14.4 allows the camera to recognize smaller QR codes, and there's a feature for specifying a device type for third-party Bluetooth-connected audio devices so that Headphone Audio Level measurements can be taken correctly.

The update also provides notifications for when the camera on an iPhone is unable to be verified as a new, genuine Apple camera in the iPhone 12 models, which would be applicable only to repairs.

There are several bug fixes for issues that include image artifacts appearing in HDR photos taken with ‌iPhone 12‌ Pro, problems with the Fitness widget not updating correctly, and a bug that could cause typing to be delayed and word suggestions not to appear when using the keyboard.

iOS 14.4 includes the following improvements for your iPhone:
- Smaller QR codes can be recognized by Camera
- Option to classify Bluetooth device type in Settings for correct identification of headphones for audio notifications
- Notifications for when the camera on your iPhone is unable to be verified as a new, genuine Apple camera in iPhone 12, iPhone 12 mini, iPhone 12 Pro and iPhone 12 Pro Max

This release also fixes the following issues:
- Image artifacts could appear in HDR photos taken with iPhone 12 Pro
- Fitness widget may not display updated Activity data
- Typing may be delayed and word suggestions may not appear in the keyboard
- The keyboard may not come up in the correct language in Messages
- Audio stories from the News app in CarPlay may not resume after being paused for spoken directions or Siri
- Enabling Switch Control in Accessibility may prevent phone calls from being answered from the Lock Screen

Though not mentioned in the release notes, there's a "Time to Walk" feature for Apple Fitness+ users on Apple Watch, which lets them listen to inspiring stories while out for a walk.

For more on the iOS 14 operating system, we have a complete iOS 14 roundup that goes through all of the features that Apple has introduced since iOS 13.

Not available yet in Miami, FL.

A much smaller picture attached to the post would have been better than the huge picture posted.
Score: 16 Votes (Like | Disagree)

I tap Download and Install, then I get the pop-up about Download Over Cellular, I tap Continue, and nothing happens.

I don't believe you.

Need a huge screenshot for proof.
?
Score: 14 Votes (Like | Disagree)

A much smaller picture attached to the post would have been better than the huge picture posted.

No picture would be even better. We all know it takes more than zero seconds to roll this out around the world. But I do understand the excitement :)
Score: 7 Votes (Like | Disagree)