Earlier this week, Apple seeded the watchOS 7.3 Release Candidate, which is typically the final beta version of a software update. The release notes for the update list a new "Time to Walk" feature for Apple Fitness+ subscribers, described as "an audio experience in the Workout app where guests share inspiring stories as you walk." 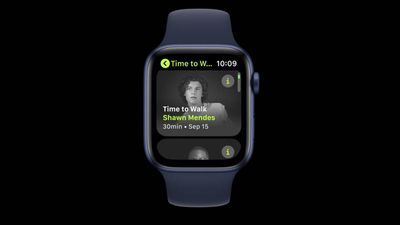 Apple Fitness+ subscribers will be able to open the Workout app on an Apple Watch, select Time to Walk, and choose from one of the audio stories to listen to during their walk. The feature will likely extend to wheelchair users.

Based on a screenshot of a since-removed Apple Fitness+ promotional video shared by Twitter user Othmane, it appears that Time to Walk will include a 30-minute story from singer Shawn Mendes at launch. Othmane says the video also showed stories from singer Dolly Parton, NBA star Draymond Green, and actress Uzo Aduba, known for her role as Suzanne Warren on the Netflix original series "Orange Is the New Black."

While settings for Time to Walk started showing up weeks ago in earlier betas of watchOS 7.3 and iOS 14.4, the stories are not yet accessible. The feature should launch when the software updates are publicly released, likely this coming week.

A new setting on the Apple Watch can be toggled on to ensure that new Time to Walk stories are added to the Workout app as they become available. The stories will be downloaded when the Apple Watch is connected to power and near a paired iPhone, and they will be deleted automatically upon completion of the workout.

Apple Fitness+ launched last month, providing subscribers with access to a library of workout videos covering strength, yoga, dance, running, walking, cycling, rowing, and more, with new content delivered each week from a team of trainers hired by Apple. Fitness+ integrates personal metrics such as heart rate from the Apple Watch to motivate users, animating them on the screen during key moments in the workout. Time to Walk will be unique given that the workouts can be completed outdoors without needing to watch a screen.

Apple Fitness+ is currently available in the United States, Canada, Australia, New Zealand, Ireland, and the United Kingdom. Apple is offering a one-month free trial to all Apple Watch users, and an extended three-month trial to customers who purchased a new Apple Watch Series 3 or newer after September 15, 2020. After the trial, the service is priced at $9.99 per month or $79.99 per year in the United States.

pauloregan
You're paying Apple to tell you which podcast to listen to.
They've monetized going for a walk.
Score: 15 Votes (Like | Disagree)

It was the handwashing thing that finally made me realise 'this is getting a bit intrusive now', and made me sell my S4. Went back to a normal automatic watch and felt much better.

You know that feature can be disabled, right?
Score: 15 Votes (Like | Disagree)

insomniac86
I seem to be the only person here that thinks this is a stupid implementation?

I’m down for the idea of stories for walking, but seriously, this is how iTunes turned into bloatware (by putting features in the wrong app).

Imo these should be offered via the Apple Podcast app. The Fitness app should provide a direct link to start the podcast.

It makes more sense for Apple to provide voice coaching for running that’s dynamic based on your current speed, heart rate etc.
Score: 15 Votes (Like | Disagree)

calstanford
It's getting dumber and more childish by the day. My watch tells me how to wash my hands, to breathe and now how to walk. I'm sorry but...
Score: 14 Votes (Like | Disagree)

swingerofbirch
Celebrities are our betters, and if they say it's time to walk, then it is time to walk.
Score: 11 Votes (Like | Disagree)

It's getting dumber and more childish by the day. My watch tells me how to wash my hands, to breathe and now how to walk. I'm sorry but...

It was the handwashing thing that finally made me realise 'this is getting a bit intrusive now', and made me sell my S4. Went back to a normal automatic watch and felt much better.
Score: 8 Votes (Like | Disagree)
Read All Comments