Samsung is set to unveil its newest flagship smartphones at a Galaxy Unpacked event that's taking place tomorrow, and ahead of the launch, leaker Evan Blass has shared Samsung marketing materials for the new devices. 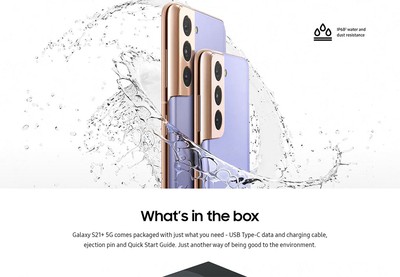 As has been rumored several times, the launch information confirms that Samsung plans to follow Apple and ship the new Galaxy smartphones without chargers.

"Galaxy S21+ 5G comes packaged with just what you need - USB Type-C data and charging cable, ejection pin, and Quick Start Guide," is what Samsung will say on its website. "Just another way of being good to the environment."

After Apple unveiled new iPhone 12 models without chargers in the box back in October, Samsung mocked Apple for removing the power adapter. "Included with your Galaxy," read Samsung's ad, which featured a picture of a Samsung power adapter.

After unveiling the new iPhones, Apple said that the power adapters (and earbuds) were removed for environmental reasons, but there was speculation that Apple removed the accessories to cut costs due to the high price of the 5G modems in the ‌iPhone 12‌ devices.

Samsung also plans to say that it is aiming to improve the environment by ditching power adapters.

The two lower-end smartphones will have triple-lens camera setups, but the high-end model will have a four-camera setup with a 10MP 10x super-telephoto zoom, a 108MP main sensor, a 12MP ultra wide lens, a 10MP 3x telephoto camera, and a laser autofocus system.
Tag: Samsung
[ 122 comments ]

nvmls
Well on their defense, no one would buy their phones anyway, even with chargers.
Score: 21 Votes (Like | Disagree)

now i see it
Waiting for the Samsung Car and social justice initiatives
Score: 19 Votes (Like | Disagree)

abaxworld
That's what I call Hy-po-cri-sy in capital letters.
Score: 14 Votes (Like | Disagree)

larrylaffer
Such a display of courage!
Score: 13 Votes (Like | Disagree)
Read All Comments

Monday January 4, 2021 2:20 am PST by Tim Hardwick
Samsung has sent out media invites to its Galaxy Unpacked event on Thursday, January 14, when the company is expected to officially announce its new Galaxy S21 lineup. Samsung is expected to unveil three new smartphones at the event: The Galaxy S21, S21 Plus, and S21 Ultra. The successors to last year's Galaxy S20 series will come in familiar 6.2 to 6.8-inch size options, with the S21 and...
Read Full Article • 66 comments

Thursday April 8, 2021 6:38 am PDT by Sami Fathi
Samsung will release the Galaxy SmartTag Plus on April 16 for $39.99, becoming the first mainstream item tracker with support for ultra-wideband technology, The Verge reports. In January, Samsung announced the "Galaxy SmartTag," a small squircle-shaped device that can be used to track and locate items such as keys, bags, and more. Samsung announced two versions of the SmartTag, one that uses ...
Read Full Article • 103 comments

Tuesday December 1, 2020 8:37 am PST by Hartley Charlton
Samsung is reportedly developing an item tracker called the "Galaxy Smart Tag" that appears to be positioned as a rival to Apple's long-awaited AirTags product (via SamMobile). In August, alongside the unveiling of the Samsung Galaxy Note 20, the South Korean company explained how its SmartThings Find feature can locate compatible Galaxy products with greater accuracy. It is now being...
Read Full Article • 145 comments

Tuesday February 23, 2021 2:12 am PST by Sami Fathi
In what could be seen as an attempt to catch up to Apple's legacy software support for older iOS devices, Samsung is now promising Galaxy users that they'll receive security software updates for "at least four years" after a device's initial release. Samsung and Android have long had a reputation of being a fragmented ecosystem when it comes to OS updates. Samsung, unlike Apple, has...
Read Full Article • 73 comments

Tuesday October 27, 2020 4:29 pm PDT by Juli Clover
Samsung's Galaxy S21, coming in 2021, may not include a power adapter or headphones in the box, according to reports from Korean media sites highlighted by SamMobile. Rumors earlier this year also said that Samsung was considering removing these accessories from future smartphone models, but that didn't stop Samsung from mocking Apple for selling the iPhone 12 models without a power adapter...
Read Full Article • 215 comments

Thursday January 14, 2021 11:23 am PST by Juli Clover
Alongside new flagship smartphones, Samsung today announced the launch of its Galaxy SmartTags, item trackers that seem to be similar in design and functionality to Apple's long-rumored AirTags that have yet to launch. Design wise, the Galaxy SmartTags have a squircle shape with a small cutout at the top that's designed to accommodate a key ring or strap for attaching it to various items....
Read Full Article • 218 comments