LG announced it will launch the world's first rollable smartphone this year, as it offered a sneak peek of the device at CES 2021 with a five-second teaser video. 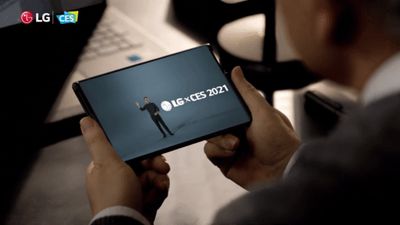 The clip features a smartphone held in landscape orientation as the display rolls in from an expanded tablet-style form factor screen into a more compact chassis.

The hybrid handset is said to be based on flexible organic light-emitting diode technology, which is reportedly being supplied by China's BOE Technology Group, although the specifics of the tech remain unclear. Speaking at CES, the company told Nikkei Asia that the product would be officially released later this year:

"Our management wanted to show that it is a real product, as there were many rumors around the rollable phone," said Ken Hong, a spokesman for LG. "As it is released at CES 2021, I can tell that it will be launched this year."

LG's rollable display follows the moderate success of Samsung foldable smartphones, and comes as the LG's phone business is struggling financially due to stiff competition from the likes of Samsung, Huawei and Apple.

Apple has explored rollable displays in the past, based on patents from the company. In March 2020, a patent attributed to Apple appeared on the U.S. Patent and Trademark Office that describes an "Electronic device with flexible display structures."

The patent details a flexible display that can be wrapped around one or more internal roller mechanisms, allowing the screen to expand out of the chassis. A rigid section remains to house the printed circuit boards and other electronic components, but with the addition of the rollable display layers.

"Elongated bistable support members may run along the edges of the display or may be overlapped by a central active area of the display to help stiffen and support the display in its extended position," explains the patent, which conceives the technology as adaptable to anything from a smartphone to a smartwatch.

As with all Apple patents, there's no indication that Apple has plans to bring such a device to market, but it is interesting to see what sorts of future solutions Apple is eyeing as it seeks to innovate beyond current consumer-use technologies.

and Egyptians will start a patent dispute :):p

neuropsychguy
We will be able to scroll on our scrolls. That patent is for the new iScroll.
Score: 8 Votes (Like | Disagree)

Johns12
Oh my. Already nine posts and not one saying, we don't need this, stupid idea, solving no problem, etc. I am happy to see tech advances being looked at through the prism of creativeness.
Score: 8 Votes (Like | Disagree)

coredev
It really looks like CGI to me, this whole shape shifting.
That isn't to say that they have actual prototypes of it.
Score: 6 Votes (Like | Disagree)

DaRev
Rollable screens are exciting, I’d rather see them on tablets than phones since phones get tossed around more.
Score: 4 Votes (Like | Disagree)
Read All Comments

Friday March 18, 2022 4:30 am PDT by Hartley Charlton
LG is working to supply Apple with OLED display panels for two iPad models before providing larger panels for the company's first OLED MacBook around 2025, The Elec reports. LG Display is reportedly aiming to supply Apple with Gen 8.5 OLED panels for Apple's first OLED MacBook. The device is said to be scheduled to launch "around 2025." LG has been evaluating the deposition process to...
Read Full Article • 58 comments