As a privacy measure, Apple will be requiring developers of iPhone and iPad apps to request permission from users to track their activity across other apps and websites for personalized advertising purposes starting early next year. 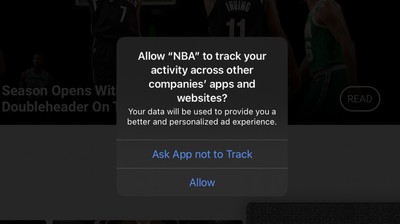 Ahead of time, the prompt for users to allow or deny tracking has started to show up in the first beta of iOS 14.4, seeded last week. A screenshot shared in the MacRumors forums shows the NBA app requesting to track a user's activity, with the customizable fine print indicating that the data will be used to provide users "a better and personalized ad experience."

Update: We've learned that apps have been able to prompt users for tracking permission since iOS 14 was released in September, and some apps already introduced the prompt prior to the iOS 14.4 beta. Apple is still planning to require use of the prompt "early next year."

Last week, Facebook claimed that Apple's new requirement will hurt small businesses, adding that the move is "more about profit than privacy." In a full-page newspaper ad, Facebook said that Apple's move will force small businesses to turn to subscriptions and other in-app payments for revenue, in turn benefitting Apple's bottom line.

"They're hurting small businesses and publishers who are already struggling in a pandemic," said Facebook, in a blog post. "These changes will directly affect their ability to use their advertising budgets efficiently and effectively."

In response to Facebook, Apple expressed that users deserve control and transparency. "We believe that this is a simple matter of standing up for our users," said Apple, adding that "users should know when their data is being collected and shared across other apps and websites — and they should have the choice to allow that or not."

"When a company does the right thing for its users, EFF will stand with it, just as we will come down hard on companies that do the wrong thing," the EFF said. "Here, Apple is right and Facebook is wrong."

Mac Fly (film)
Can you go into settings and ask all apps not to track?
Score: 45 Votes (Like | Disagree)

planteater
"Ask app not to track." Shouldn't that be "Block app from tracking." Is it blocking or not?
Score: 40 Votes (Like | Disagree)

UndefinedxJoker
Great move by Apple. Facebook was lucky that this wasn’t done earlier and should be happy instead of throwing a fit over INFORMING users about what is done with their data.
Score: 38 Votes (Like | Disagree)

nwcs
It should not be “ask not to allow” but a firm “deny” button to be clearer.
Score: 35 Votes (Like | Disagree)

jz0309
Can't wait for that release, bring it on!
Score: 18 Votes (Like | Disagree)
Read All Comments

Wednesday December 16, 2020 8:27 am PST by Joe Rossignol
Facebook today in a blog post claimed that Apple's upcoming anti-tracking privacy-focused change in iOS 14 will have a "harmful impact on many small businesses that are struggling to stay afloat and on the free internet that we all rely on more than ever." Facebook has also launched a "Speak Up For Small Business" page. "We disagree with Apple's approach and solution, yet we have no choice...
Read Full Article • 570 comments